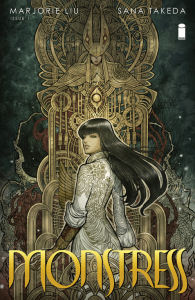 Maika is on a mission, and she’s willing to put herself into the proverbial lion’s den to see it through.

Monstress takes place some years after a war between humans and “arcanics”, a race of people as different from each other as they are from us. Appearing otherworldly, some have animalistic features, some demonic, some childlike. The trait that all arcanics share is that they’re shunned by humans, hunted by the nuns of the Cumaea Order, subjected to horrific experiments, their remains distilled into a valued element called lilium.

Much of the mutual animosity between humans and arcanics seems to come from a decisive moment in their war, the Battle of Constantine. With hundreds of thousands left dead, and no reliable accounts of what caused the devastation, Constantine resulted in an uneasy cease fire, both sides pulling back to their respective territories to recover. This doesn’t mean there’s any peace… It’s open season on any arcanics caught in human territory, and Sophia Fekete, chief experimenter for the Cumaea, is always looking for subjects.

Which brings us back to Maika… From our first look at her, we’re given the face of a person who’s survived unspeakable things. She was at Constantine, and if I had to guess I’d say that she knows more about what happened there than she’s letting on. Now, however, she has a different focus. Allowing herself to be captured by the humans, put in chains and brought to the Cumaea, her goal isn’t immediately evident. What is painfully evident is that she’s haunted by the tragedies of her past. It’s made obvious by her missing arm, whether it was mangled, torn away, or surgically removed. Less obvious, but still right there, artistically conveyed on the page, is in her face and eyes… Sana Takeda has beautifully rendered Maika’s features to show the pain suffered by the survivors of war throughout history.

In her afterword, writer Marjorie Liu says that their goal was to show the aftermath of war. Her story stems from stories from her grandparents who’d lived through World War II in China (just because China wasn’t directly involved doesn’t mean it was untouched, by any stretch). In Liu’s words, “what ravaged Europe during WWII, also ravaged China and the rest of Asia. And the victims of this horror had to learn how to first survive… and then survive the surviving.”

Without a doubt, Maika has lurking inside her a monster born of tragedy and loss… a monster both metaphorical, and judging by several hints and glimpses we’re given, a very real one. On her search for answers about her past, her mother, and her inner beast, Maika has a lot to overcome. As we read along with her on her quest, we’re gifted with an intelligently written story, brought to life by some gorgeous manga-styled artwork. All of this praise comes with the addendum that this is not a series for the kids… It covers some pretty dark themes, but it does cover them well.

If living is about more than just surviving, Maika’s inner monster will be very disappointed. 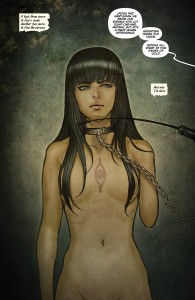 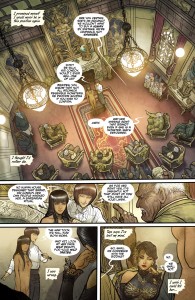 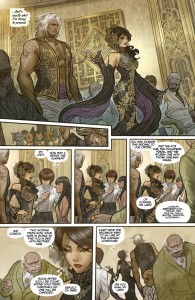