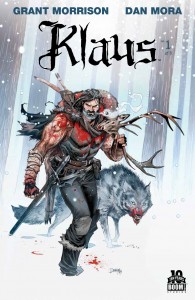 Klaus #1 (of 6) from Boom! Studios
Writer: Grant Morrison
Artist: Dan Mora
Set in a dark fantastic past of myth and magic, Klaus tells the story of how Santa Claus really came to be. Where did he begin? What was he like when he was young? Why does he do what he does? How does he do what he does? And what happens when he faces his greatest challenge? Drawing on Santa Claus’ wilder roots in Viking lore and Siberian shamanism – taking in the creepier side of Christmas, and characters like the sinister Krampus – Klaus is a “Santa Claus: Year One.”
———-

“Once upon a time. And a place. There was a man. These days everyone knowns his name, but few could tell you who he really is.. or how he got started.

“This is the greatest untold story of them all.”

Now that’s a pretty bold claim… especially since we’re talking about jolly ole Saint Nick. Father Christmas. The myth, the legend, Santa Claus! Looking at Santa’s origins, he goes farther back then his Christianized origins would imply. A LOT farther back. This book lays its sights on his Germanic roots, and if you know anything about German myth, those people didn’t do anything “soft” or wishy washy.

Enter the stranger, slogging through deep snow, pulling his sleigh full of pelts and meat for trade. He’s a rugged man, not at all pudgy or jolly, entering the much too quiet town of Grimsvig. He’s been here before, but it isn’t the town he remembers, particularly during the Yuletime Festival. The streets are empty, except for the imposing presence of the guard, and the men are all working in the coal mine. The stranger is determined to do his business and be on his way, but that doesn’t seem to be the way this story is going.

Before too long the weary traveler is accosted by the guardsmen, his goods are taken as property of Baron Magnus, and he’s told to leave the town before bad things happen to him. All fine and dandy for this quiet stranger who wants nothing more than to be left alone (hm, sounds like a classic anti-hero to me). Until, that is, the guards turn their aggression to a young boy who’s guilty of nothing but playing with a rock. That’s right, you heard me… a rock. Not only are strangers not welcome in Grimsvig, but anything even remotely resembling a “toy” has been declared the property of the Baron’s son, Jonas.

Will the man who would some day take up the mantle of Santa Claus allow a child to be bullied by armed men? Will he quietly leave the oppressed town of Grimsvig to its fate, ground to dust under the heel of Lord Magnus? Will the children of Grimsvig suffer through the Yuletime Festival with no toys?

Okay, maybe you can jump to a conclusion or two here, but the fun of this story isn’t going to be found in its foregone conclusion, but in the ride we’re taking to get there. Grant Morrison has tapped deeply into German and Nordic myth to put together a story about the early days of one of the world’s most recognized figures of folklore. In this story, Klaus is just a man, but he’s a man who won’t stand by while children are denied the right to be children. The artwork by Dan Mora is dynamic and clear, showing everything we need to see.

With the season coming on faster than you can say “Black Friday”, the time for this story couldn’t be more perfect. Just… um… maybe not let the youngsters get a look at this book. In his younger days, Santa was kind of rowdy, and we wouldn’t want them getting confused about just who might be creeping down the chimney. 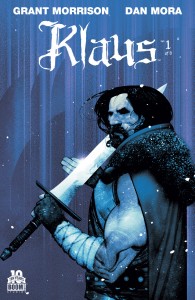 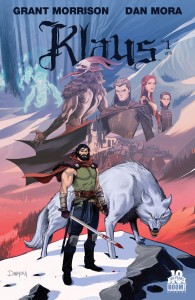 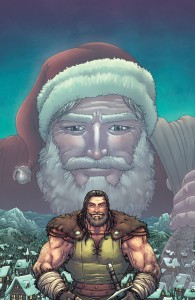 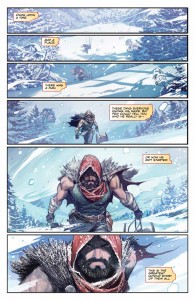 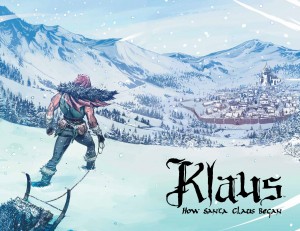 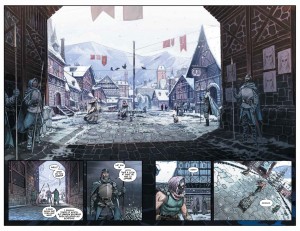