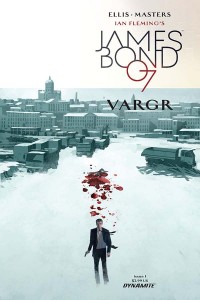 Beginning “VARGR”, the first story in the ongoing James Bond comic series by best-selling writer Warren Ellis! James Bond returns to London after a mission of vengeance in Helsinki, to take up the workload of a fallen 00 Section agent. But something evil is moving through the back streets of the city, and sinister plans are being laid for Bond in Berlin…
In Stores November 4th in advance of the block buster movie on November 6th!

Dynamite Entertainment is proud to launch the first James Bond comic book series in 20 years! “Ian Fleming’s James Bond is an icon, and it’s a delight to tell visual narratives with the original, brutal, damaged Bond of the books.” – Warren Ellis
———-

I’m gonna admit to something here, and I don’t you guys to tell anyone… While I was reading the opening to this comic, I could absolutely hear the iconic James Bond theme playing in my head. I couldn’t help it. The setup was perfect, in that there really is no setup whatsoever. In the style of every James Bond movie ever made, this series starts with as high octane and fast paced a chase scene as I’ve seen in a comic book. The artwork was sharp and on point, dynamically rendered so that the action on the page did everything but move. The sharp bark of Bond’s Walther P99 came through loud and clear. Turn the page, and we’re with James as he gives “M” his after action report. And again, this scene delivers what we’d expect from a James Bond adventure… There’s the gratuitous flirting with Moneypenny, there’s M’s stern disapproval of Bond’s handling of the situation even as he’s given his next assignment. Name it, and it’s here.

To some, the very fact that the first issue is giving us everything we’d expect could be a bad thing. Truth be told, for an opening issue it was a little predictable in some respects, but I grew up in the Roger Moore days and have since watched every James Bond movie at least once. There is a formula there, and I think that it’s only fitting that this be honored in the first issue of an ongoing series. As a possible introduction to readers who might not have the background with these stories, Warren Ellis, Jason Masters and the whole gang at Dynamite have done a fine job.

What remains to be seen is if there are surprises ahead… But come on, give us at least one overly complicated death trap, James dangling over a vat of acid or something as the villain goes into great detail about his evil plans. Just one.