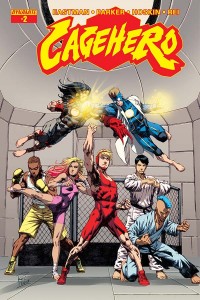 Cage Hero #2 (Dynamite Entertainment)
Created by Kevin Eastman, Ian Parker, & Mark Mastrandrea
Story by Parker & Eastman
Script by Rik Hoskin
Art by Renalto Rei
Colors by Ross Campbell
School kid Ryder Stone’s life is turned upside down when he’s caught in the middle of a fight between two super-powered opponents, both of whom want Ryder’s secret power–a power he doesn’t know he has! Can Ryder unlock the hero from within before it’s too late?
———-

Judging by the number of hands involved in this project, it’s got to be a labor of love. And there is a lot to like here. First and foremost, we have the involvement of Kevin “Teenage Mutant Ninja Turtle” Eastman. The tone of the book doesn’t seem to be taking itself too seriously for the material. It’s just kinda fun.

In the first issue, which was very well covered by Susan (the newest member of the Pullbox family… I’m not the New Guy anymore!), we’ve established a few facts. Ryder is a high school student, new to the area, and has yet to make many friends. He’s a wrestler, and by all accounts a very good one. His mother passed away some time ago, his father is serving with the military and is currently deployed. Ryder lives with his grandfather, the living embodiment of the crusty old Vietnam veteran, rough around the edges and relentless when it comes to keeping Ryder on track. Grandpa also has secrets… a past that he’s not very keen on being found out.

At the end of the first issue, Ryder is at the hospital, having learned that his Grandfather had a heart attack. While he’s there, he’s approached by a mysterious fellow who seems to know Ryder’s grandfather, and claims to have insight into Ryder’s destiny. Almost on cue, a hospital janitor transforms into an imposing supervillain named Stryken, and the mysterious stranger reveals himself to be Doctor Proton! Stryken declares that he’s there for Ryker and his mystical amulet, Doc Proton states that he’s there to protect same. Let the super-banter begin!

The second issue opens up with a super powered beat down, ending abruptly when Doctor Proton delivers a side kick that launches Stryken through the hospital wall and out of sight. From here we go through the motivational “You’re meant for something great” speech, as Dr. Proton explains how he and Ryker’s grandfather served together in Vietnam. Their unit came upon a meteor composed of a mysterious substance dubbed “ACX”, which gave each of them enhanced abilities. The ACX was forged into eight medallions, each given to a member of the squad. Over time, one member of the unit was separated from the others during a firefight, and left behind. He returned years later as the villainous Dark Sanctum. His goal is to gather all of the medallions together and use their power for Evil (pronounced Eee*vyl). The rest of the squad when their own ways, determined to keep the secret of the amulets safe.

Now, Dark Sanctum seems to have tracked down his old teammates and their families, and it’s up to Doctor Proton and young Ryder to gather a team of outstanding martial artists to take up the power of the amulets before they fall into Sanctum’s hands. The Cage Hero team will consist of: Ricky Little, a boxer from England; Nemoto Kaneko, karateka from japan; Janee Sky, Australian kickboxer. There was going to be a Brazilian jiu jitsu phenom named Marco Lima, but his uncle thought the fifteen year old was too young to be turned over to a total stranger… huh, odd that the rest of the kids’ guardians didn’t have that issue. The kids begin their training montage, and begin the process of comparing their different styles and techniques, to blend them together into a mixture of martial arts. Hey… “mixed martial arts”… that could totally be a thing.

Okay, sure, there’s a LOT of ridiculous in this series so far. Some of the dialogue is over the top, to say the least, but there’s also some pretty witty writing going on in there. The art is pretty sharp and dynamic, totally fitting into the story’s premise of a super hero team consisting of young martial artists from different backgrounds and disciplines. Altogether, with the occasionally cheesy plot devices/holes, combined with the use of the popular sport of mixed martial arts (MMA, of which I am a fan), and this book really has sort of a “throwback” feel to me. I remember the crop of books capitalizing on a “flavor of the day” subject matter (Eastman and Laird pretty much kicked that trend off with the Ninja Turtles) , both good and bad, and Cage Hero has that kind of attitude.

It might not win an Eisner Award, but this book can be very entertaining. The use of different martial arts styles seems to come across as authentic and educated, so there are either some people with training involved in the book, or they’ve really done their homework. I can see this series being a great thing for a younger audience that may be interested or involved in the martial arts, and maybe for any adults of a less than mature nature (Why are you looking at me like that? You been talking to my wife?).