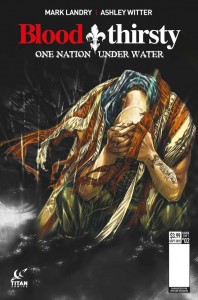 In the first issue of Blood Thirsty, we were introduced to Virgil Lafleur, veteran of the Louisiana Coast Guard who is still haunted by the memories of countless rescue operations following Hurricane Katrina. After saving countless lives, Virgil can’t shake the guilt of not being able to save his own parents. Added to the horror of Katrina and his dead parents, Virgil was witness to an underwater graveyard full of corpses, their throats freshly cut. This last was attributed to PTSD and dismissed as hallucination. 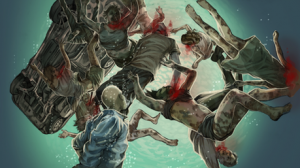 Currently, Virgil is getting ready to pack it up and leave New Orleans for good. There’s another hurricane on the way and he wants nothing to do with going through that again. He’s said his goodbyes to his brother Trey, a scientist working on some pretty cutting edge biological testing for something called the “Longevity Project”. For his part, Trey is sorry to see Virgil go, but he’s excited about some supposed breakthrough.

This breakthrough carries a little more consequence with it than a few dead lab rats, and this is after all a “revenge story”. Trey is murdered, and Virgil approached by a mysterious stranger who demands that he produce his brother’s findings. From here, Virgil follows a trail of breadcrumbs that lead him deeper into a conspiracy far larger than anything he could have anticipated. It leads him to a club called the Rising Sun Cabaret, and a meeting with Mother Taneesha, the result of an unholy union of the Humongous from The Road Warrior and Dr. Frank N. Furter from The Rocky Horror Picture Show.

Blood Thirsty has it all… shadowy organizations, human sacrifice, and a protagonist who in my head is played by a slightly less bulked up Dwayne “The Rock” Johnson. I could have gone with Vin Diesel, but in my mind his performance just wasn’t nuanced enough to play the tortured by guild Virgil… For the record, I’m not totally happy with the imaginary soundtrack either. Also for the record, to me this story plays out just that cinematically.

The only item that took me out the mental movie mode was the introduction of a comic book hero for the “everyman” by the name of “Who Dat”. The significance of this “Spirit of New Orleans” is that he was young Trey’s favorite comic book hero when he was growing up. Once Virgil starts to unravel the deeper story behind his brother’s murder, he adapts this vigilante character and takes on Who Dat’s symbol, the Fleur de Lis. While I appreciate the story of a more reality based comic book world with a character emulating a comic book hero in this comic book story, I’m just a little put off by the name… I dunno, it could be just me being more nitpicky than I should be… and if there actually is a New Orleans indy character named Who Dat, I’m sure he’s a very cool hero in his own right.

On the whole, this is a pretty deep story, carrying elements of PTSD, family tragedy, conspiracy, and underworld dealings rolling along on a collision course with a man who’s just trying to make peace with what he sees as his past failures. 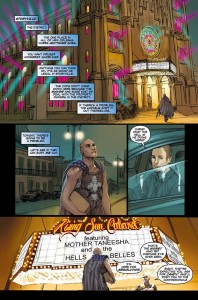