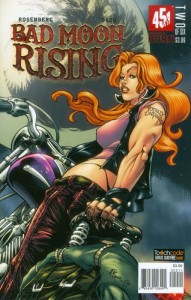 It’s Hell on Wheels when Sheriff George Waggner is killed. His son Teddy returns home to discover that the small town has become victim to a rash of brutal murders. The investigation points to the nomadic motorcycle gang, the Lunar Cycles, that has set-up camp just outside of town. The arrival of werewolf hunter Noah Packard confirms that the bikers are more than they claim to be. Get ready for one wild and hairy thrill ride when the moon and the gas tanks are full and the townies and werewolves go to war to kick some serious werewolf butt in this wild and wooly smash up of THE WOLFMAN and SONS OF ANARCHY.
———-

Ted Hanlon is back in his small home town of Talbot to bury his father, the town’s Sheriff. He’s been gone a number of years, having left the “one horse town”, and his girlfriend Gwen, for a life in the big city. Ted doesn’t seem to have many fond memories of Talbot, aside from Gwen, but in the first issue he found himself getting sucked into several mysteries surrounding Sheriff Hanlon’s death. By all appearances the death was the result of an animal attack, from fatal claw and bite wounds to samples of wolf hair found on the body. The biggest discrepancy is the sheer size of the wounds, and the aggressiveness of the attack being out of character for any wolf.

Ted’s arrival in Talbot coincided with that of a motorcycle club called the “Lunar Cycles”, led by a fellow by the name of Coop. The M.C. is celebrating the recent release from prison of one of their own, a rowdy and untamed guy named Jimmy, who’s eager to raise some hate and discontent. Also coinciding with the arrival of the Lunar Cycles is a second wolf attack, this time on a young couple. The woman was killed, however the man fought back and actually managed to fend off the animal, cutting off one of its paws in the process.

The mystery really piqued Ted’s interest when, right at the end of issue 1, the huge wolf’s paw that was their only solid evidence was suddenly a human hand. Meanwhile, the recently released from prison and ready to party Jimmy comes back to his club minus a hand. Mystery solved, right? Not so fast, buddy… If Jimmy just got out of prison, and the Lunar Cycles just rode into town at the same time as Ted got there for his father’s funeral, it doesn’t quite add up. It looks like Talbot has more than one furry killer stalking the local populace.

The second issue continues to follow Ted as he looks into the circumstances of his dad’s death. His travels around town give him a good reminder as to why he left Talbot in the first place. The local bullies that hounded him in high school have grown up into redneck thugs, everyone still thinks of him as little “Teddy”, the sheriff’s kid, and to top it off his highschool sweetheart, Gwen, is still pissed at him for leaving her for the big city.

The story around the Lunar Cycles develops further as we learn that their leader, Coop, seems tired of life on the road, and is considering laying roots in Talbot. This isn’t sitting well with Jimmy, who still seems eager to “prowl and howl” despite the loss of a hand. Another addition to the story is the arrival of Dakota, Jimmy’s sister, looking to rejoin her M.C. after some time away. She’s welcomed warmly by Coop… maybe because she seems able to hold her brother Jimmy in check.

This is a good series so far, especially if you happen to be a fan of stories about werewolves and/or motorcycle gangs… sorry, clubs (they hate that “gang” thing). Bad Moon Rising does a good job of tying the life of the werewolf to that of an M.C. on the move. The writing seems a little clipped at times, almost as though conversations between characters have been distilled down to their essential bits, leaving out the small talk. It’s odd, but when I’m reading those conversations, it reminds me of dialogue from some “direct to video” or independent movies where the filmmaker is going for an edgy tone.

The artwork is really good, fitting the story well and not shying away from the gory details. Characters are easily distinguished, and some of the Lunar Cycles members look like they’ve got some stories to tell… no one looks like a “throw away” or background filler character. The action moves across the page with a cinematic feel to it, with no need for descriptive narratives to fill in the blanks.

It looks like everyone involved in the creation of this book did some homework, particularly with the Lunar Cycles M.C. I definitely got the impression that there could have been some binge watching of Sons of Anarchy involved. All in all, I like the approach to the werewolf mythology… especially the too-coincidental name of the town, Talbot (the name of Lon Chaney Jr’s character in the original Wolf Man movie).

Give this one a look if you’re interested in a gritty supernatural whodunit. If that isn’t your thing, you’d be barking up the wrong tree.