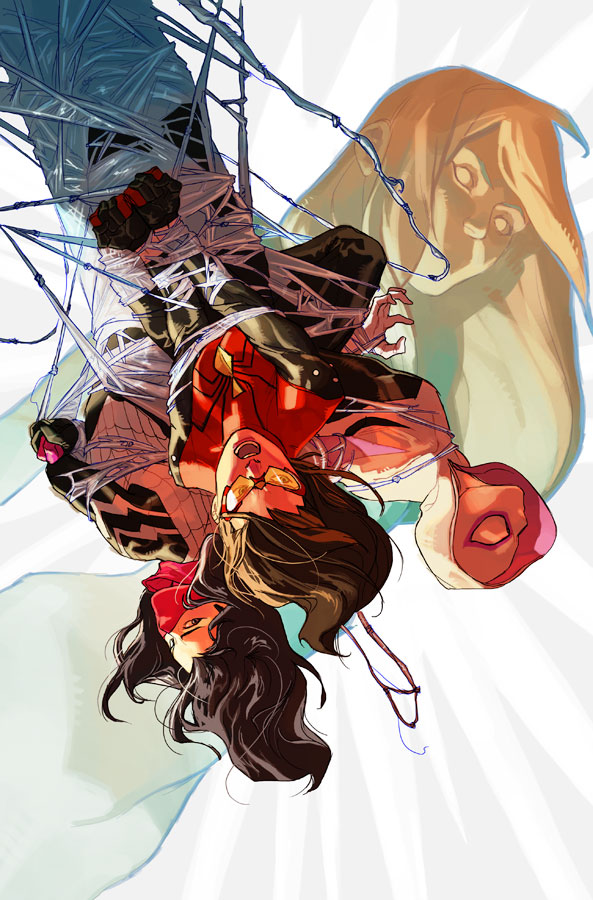 After the events of SPIDER-VERSE, Jessica Drew, Cindy Moon and Gwen Stacy have been developing a unique kind of friendship from across the multiverse. But when things go awry in Gwen’s universe, Silk and Spider-Woman of the Marvel Universe find themselves stranded in Gwen’s reality while their dangerous doppelgangers run rampant in THEIR New York!

“There’s going to be adventure, intrigue, fisticuffs, and some big twists, but I’m most excited about the personal story for each of these characters as they go through this dimension-hopping event,” explains Silk writer Robbie Thompson with Newsarama. “They’re all going to be tested and changed by this crossover.”

Being part of the “Spider-mythos” has never been easy going for any hero of the Marvel Universe and these ladies are about to enter an interdimensional crucible that will challenge them, not only as individual heroes, but as a team and how they can work together as a cohesive kick-ass  unit. “I think what’s intriguing about the three of them is that they’re really just getting to know one another,” says Jason Latour. “But as far as the initial dynamic—Jessica is definitely the big sister who’s a little frustrated by how much these girls don’t know about being superheroes.”

Next year, bear witness to the first crossover of its kind and get answers to questions you didn’t even know you had as Spider-Gwen, Spider-Woman, and Silk jump dimensions and show what it takes to be called SPIDER-WOMEN in the first action-packed chapter SPIDER-WOMEN #1!