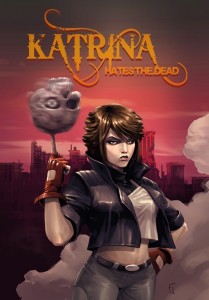 Katrina Hates the Dead (Kickstarter)
Story by Russell Nohelty
Pencils and Cover art by Juan Frigeri
Inked by Fernando Melek
Colors by Thomas Bacon
Letters by Bernie Lee
Katrina is a sacrilegious horror comedy with tons of monster killing, action, and a trip to Hell to confront the Devil.
This 116 PAGE HORROR COMEDY GRAPHIC NOVEL is complete and ready to print…and it’s a contained story! Everything we want to say is contained in these pages!
———-

A self proclaimed “sacrilegious Left Behind”, this is a lovely story about a girl. And another girl… and some hellhounds, demons, zombies… I think there’s a Minotaur in there too. Oh, and a quest to give the Devil a taste of hell for unleashing his minions on the survivors of the Biblical Armageddon. Okay, so there really is a lot going on here. Unfortunately, there isn’t much time left on the Kickstarter campaign, so you should probably get moving.

I’ll break it down… Katrina survived the Apocalypse (not the upcoming X-Men movie… the other Apocalypse), the chaos that followed as the denizens of Hell poured out into the world to make it their playground, and maybe worst of all the aftermath that came when said denizens decided to settle in and make the ‘burbs their own. In a world driven completely insane, Katrina does what she can to get by, working at a pizza joint frequented mostly by the undead, and trying to get rid of a deadbeat ex-roommate/zombie named Barry. There’s stuff that happens, and pretty soon we’re shown that Katrina definitely has the violent skills and anger management issues needed to survive literal hell on earth. Chaos ensues.

Lest you think that this book is just an excuse to exercise the Id through a liberal helping of violence and bloodshed (which it actually very much is), we are given a look into the tragedy that could have shaped a hopeful young Katrina into the death dealing hater of all things undead that she is. In the book’s opening, we’re shown a happy young couple enjoying each others company over coffee, before the Rapture occurs and she’s left alone with the man’s empty suit left behind. Another panel shows a young mother, inexplicably wearing the same outfit as she had on the date, with a child in tow, trying to find something to eat. In the next few panels, we see the mother’s horrified expression as a zombie mutters “small meal”, followed by her sitting in the rain, weeping over her child’s abandoned teddy bear. None of this tragedy is reflected in the text panels, as the story is told by a jaded and bitter Katrina, obviously beyond the point where she feels much loss anymore. Throughout the story, Katrina is pretty much limited to anger and wrath…

Admittedly, Russell Nohelty’s story does take some jumps as the plot is laid out, but in the end all can be forgiven. What we have here is a chance to sit back and enjoy some fast-paced and over the top action, delivered with excellent art by Juan Frigeri. Fans of such works as Buffy the Vampire Slayer, and Army of Darkness should be able to find something in this book to enjoy. Just leave your sense of moral outrage at the door because there’s graphic content, torture, disembowelments… pretty much every violent act we can come up with a name for. In fact, yes, I do believe there’s a defenestration or two in thee somewhere. Go look for yourself. 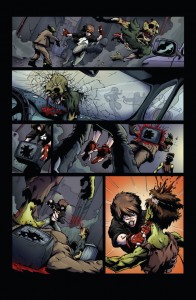 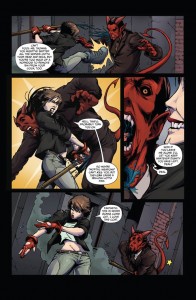 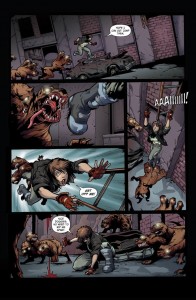 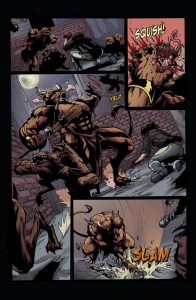 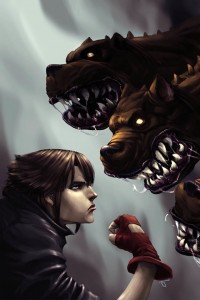