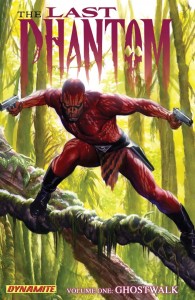 The Last Phantom (TPB) volume 1
Cover: Alex Ross
Writer: Scott Beatty
Penciller/Inker: Eduardo Ferigato
Genre: SUPERHERO, ACTION/ADVENTURE
Publication Date: Mar 2011
Format: Comic Book Collection
Page Count: 144
Forget everything you know about the Phantom as Dynamite, Alex Ross, and Scott Beatty present the ultimate tale of loss, redemption, and revenge! This is The Last Phantom!
Redesigned with the utmost care by Alex Ross – who also provides incredible covers for the series (along with variants by Blackest Night artist Joe Prado), the visuals of the Phantom pay homage to the old, while presenting the Ghost Who Walks for a whole new audience. And what better writer than Scott Beatty to enhance the vision, having created a fan-favorite and acclaimed take on another classic character in the Dynamite stable – Buck Rogers! Featuring the Dynamite debut of Eduardo Ferigato, The Last Phantom is the latest must-read from Dynamite!
Collects the the first six-issue of the ongoing series, with a complete cover gallery.
———-

Kit Walker has stepped away from his inherited role as The Phantom. Through flashbacks we see that his life, from childhood to a young adult, was spent being shaped by his father, a loveless and hard-edged incarnation of the family’s legacy. The only concern the elder Walker showed toward his son was in the training that would transform him into the warrior he’d need to be to fulfill his destiny.

Fully grown, Kit has denied his heritage, and has used his family’s wealth to create The Walkabout Foundation, a philanthropic global endeavor geared toward disaster relief. His wife Radhi only knows him as a good-hearted man running a charitable organization. His son Mosi knows nothing of what would have been his true inheritance, the family legacy passed from father to son in the Walker family.

Through a sudden by inevitable betrayal, Kit Walker’s peaceful life is thrown into chaos. His best friend and trusted adviser Peter Quisling (come on, the name totally gave it away!) wants it all to himself, and he’ll happily slaughter anyone who might stand in his way to make sure that it’s done. Left in the jungle, Kit is pulled back to his upbringing, his training, and the role his father had in mind for him from the beginning.

I’ve been a fan of old pulp adventures for as long as I was old enough to read them… Everything from the science fiction adventures of Lucky Starr (written by Isaac Asimov under a pen name “Paul French” when he wanted to write something a little lighter and less heavy-handed), to the Green Hornet, if it involved death defying action, damsels in distress (sorry, ladies… I didn’t know any better at the time), and thrilling cliffhangers, I was sold. Without a doubt, The Phantom has always been right up there toward the top of my list. He was always larger than life, patrolling the jungles of Africa and the United States, rooting out evil wherever he found it as he honored his family’s traditional role as The Ghost Who Walks. In a lot of ways, he’s Batman… only dressed in purple instead of black and gray. Sadly, The Phantom hasn’t always gotten the best treatment in his later years (don’t get me started on that Billy Zane movie…), never allowed to evolve or develop with the times. Well, here to wrong that particular wrongdoing, the creative team of Scott Beatty and Eduardo Ferigato (with character designs by the great Alex Ross) is pulling Kit Walker into the new age.

By his own back-story, Lee Falk created a character that was supposed to be a crime fighter born of the African jungle. Anyone who’s watched Animal Planet on cable knows that the jungle isn’t a nice place, it doesn’t play by civilized rules, and when you step out of line it is ruthless. I mean it, not an ounce of “ruth” to be found whatsoever. So based on that, is this take on the character and his world an update, or is it simply a no-holds-barred breakdown that’s stripped the pulp hero down to his roots? This Phantom is heartless in his single-minded determination to find the justice that his family deserves, looking to the Law of the Jungle to weigh the morality of his actions. He’s fierce, he’s unforgiving, and he’s coming for the bad guys. 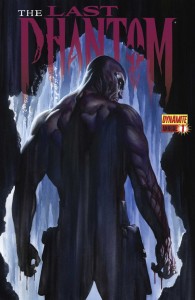