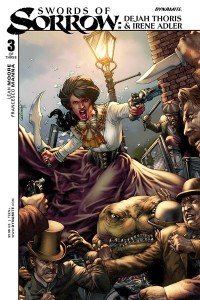 Swords of Sorrow: Dejah Thoris and Irene Adler #3
Cover: Jay Anacleto
Writer: Leah Moore
Art: Francesco Manna
The streets of London are no place for a woman all on her own. They are, however just fine for a woman wielding a Sword. Dejah Thoris is used to London’s dirt, and its rain, but she is growing tired of its people. She and Irene Adler must surely band together to find the Banth and get Thoris back to Barsoom, but to do that, one of them would first have to back down…
———-

The Swords of Sorrow storyline continues, bringing the First Ladies of adventure together from all across the known universes and multiple media…

Irene Adler, the sometimes love interest of Sherlock Holmes, is tracking a monstrous “cat” across London after the Prime Minister is killed and… um… eaten. Understandable. You can’t run a nation and allow this kind of thing to go unchecked. Ms. Adler’s investigation is hindered by another interested party: Princess of Mars Dejah Thoris, brought to London and stranded by a bizarre portal and gifted with one of the mysterious black blades, is also tracking the beast in the hopes that it could lead her to a way back home to Barsoom.

The inevitable happens. Adler and Thoris duke it out briefly before realizing that they’re working toward the same goals… more or less. Without a doubt, Adler would like nothing better than to have the Martian Princess out of London and out of her hair. Once it’s established that the two working together can accomplish much more than if they’re at each others throat, their powers are combined. Mischief and mayhem ensue.

To be honest, this isn’t the strongest of the entries in the Swords of Sorrow storyline, but it’s still a good time. The two literary figures, generally overshadowed by their manly counterparts as befits women of their respective times and places, are still deserving of respect and attention in their own right. Dejah Thoris has done a fine job of holding Barsoom together in the absence of its “Warlord” John Carter, and Irene Adler holds the single distinction of being one of the few to be able to hold their own when up against one of fiction’s greatest minds (by the good detective’s own admission).

Overall, Dynamite Entertainment is doing a great job of presenting all of their leading ladies in their own adventures sans men, and as the main Swords of Sorrow storyline progresses, I have high hopes that the whole will turn out greater than the sum of its parts.