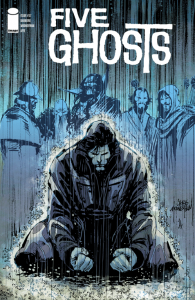 Thanks to the Dreamstone, a fragmented piece of the dream realm given physical shape and embedded in his chest, adventurer/thief Fabian Gray carries the spirits and abilities of five of literature’s greatest characters. These characters are left unnamed throughout the series but they all hold a pretty impressive resemblance to their respective namesakes: The Detective (Sherlock Holmes), The Archer (Robin Hood), The Samurai (Miyamoto Musashi… not actually “fictional”, but definitely legendary), The Wizard (Merlin), and The Monster (Count Dracula). As a side note, I actually kinda like that the “ghosts” aren’t named specifically. Letting the reader take in and process information on their, draw their own conclusions, and maybe even develop an interest in these literary figures apart from this series, shows a little bit of respect for an audience. You might argue that it was more likely some copyright hitch, but I’m sticking to my idea… You don’t like it, write your own article.

Whatever route taken to get here, it’s a pretty cool plot device, when you get down to it… Everything that’s ever been conceived by people maintains a presence in the “dream realm”. All thought, all ideas, anything that’s ever gotten a foothold in the shared consciousness… And what better way to solidify that shared consciousness than through a book that’s read over and over again by a global audience, spread out over time. The more popular a particular book or character, the more its read, and the stronger its presence. Add a little dreamstone, and you’ve got five fully developed personalities, each a dominant leader on his own, vying for equal representation in the “time share” that is Fabian Gray.

This issue, #17, wraps up a story arc that brings even more of a supernatural element to the series, as if disembodied fictional characters inhabiting a guy and granting him all of their powers and abilities wasn’t enough. Fabian is pitted against vampires and the beastly mutates of Dr. Moreau. Yeah, that Dr. Moreau. This story arc also opens up Fabian’s world to a larger and more threatening antagonist… the shadowy and far-reaching organization known as the Cabal.

The immediate threat comes from the evil scientist (sure, cliché… we’re talking about a comic book) Dr. Moreau. Yeah, that Dr. Moreau, so expect to find plenty of twisted mutates running around raising hate and discontent. In his fight with Moreau, Fabian discovers that the “Cabal” is his true enemy. Turns out they’ve been searching for the Dreamstone for a very long time, and aren’t squeamish about the methods they use to get it.

I like this series, and I was pretty happy to hear that it’s being developed for television by the Sci Fi channel (I refuse to use that “SyFy” tag…). I hope they do it some justice, and it generates some more interest in the books.