BOOK OF DEATH #4 (of 4)
Written by ROBERT VENDITTI
Art by ROBERT GILL and DOUG BRAITHWAITE
Cover A by CARY NORD
Cover B by MICO SUAYAN
Cover C by MARGUERITE SAUVAGE
Valiant Icons Variant by PERE PEREZ
Variant Cover by PAOLO RIVERAAn evil Geomancer has torn the world asunder… The dark puppet master pulling the strings has been unmasked… And the Valiant Universe as we know it is being torn apart… The end is here!

Now, not even the combined might of the Valiant’s best and brightest can avert the coming apocalypse – not without a sacrifice, that is. Who will pay the ultimate price to avoid the Armageddon promised in the pages of the Book of the Geomancer? And how will it irrevocably change the course of Valiant Universe?

All the answers are here in the climactic final chapter by longtime Valiant scribe Robert Venditti (X-O MANOWAR) and all-star artists Robert Gill (ETERNAL WARRIOR) and Doug Braithwaite (UNITY)! So let it be written… So let it be done!

BOOK OF DEATH: THE FALL OF X-O MANOWAR #1
Written by ROBERT VENDITTI
Art by CLAYTON HENRY
Cover A by CARY NORD
Cover B by STEPHEN SEGOVIA
Variant Cover by RYAN LEE
Variant Cover by DIEGO BERNARD

The Book of the Geomancer foretells of a deadly future for the Valiant Universe…but what if the future holds hope for one powerful hero?

After hundreds of years in exile on an alien planet, Aric of Dacia has returned to an unfamiliar Earth, only to find a planet that doesn’t remember…or want him. Will Aric of Dacia finally find happiness in the aftermath of the apocalypse?

BOOK OF DEATH: LEGENDS OF THE GEOMANCER #4 (of 4)*
Written by FRED VAN LENTE
Art & Cover by JUAN JOSÉ RYP

Anni’s final trial lays everything on the line…and the violent transformation it creates will determine the shape of the Valiant Universe forever!

Anni, the first Geomancer, has lived countless centuries and shepherded the Earth and her people through upheaval and disaster. Now, generations upon generations later, she finally begins the twilight of her life. The secrets of the Geomancer will not die with Anni, and the Earth must not be left without her warrior…

ATTENTION FANS – BOOK OF DEATH: LEGENDS OF THE GEOMANCER:
• SPECIAL ALL-NEW LIMITED SERIES!
• QUANTITIES WILL BE LIMITED!
• NOT FOR SALE DIGITALLY!
• WON’T BE COLLECTED FOR THE TRADE!
• ASK YOUR LOCAL RETAILER HOW TO ORDER!

*ATTENTION RETAILERS – BOOK OF DEATH: LEGENDS OF THE GEOMANCER:
PLEASE SEE THE DIAMOND DAILY OR VALIANT RETAILER EMAIL TO FIND OUT HOW TO QUALIFY FOR THIS LIMITED RATIO INCENTIVE. QUANTITIES WILL BE BASED ON ORDERS OF BOOK OF DEATH #4 (of 4).

As responsible as Ray Garrison feels for the violence unleashed by his old nanites, he finds himself with another more familiar and painful responsibility – the life of a woman he loves. How will Ray keep Magic safe, avoid the federal manhunt that’s closing in on him, and stop his impostor before they kill again?!

Be here as the next pulse-pounding story arc from New York Times best-selling writer Jeff Lemire (All-New Hawkeye) and comics legend Butch Guice (The Winter Soldier) brings us one step closer to identifying the mysterious killer trying to claim all of Bloodshot’s power!

Ninjak goes toe-to-toe with the brains of the Shadow Seven operation: the deadly and very intelligent Fitzy. But as Colin King discovers he has much more in common with this group of thieves and murderers than he’d like, will he be able to hold onto his honor…and his sanity?

Meanwhile, MI-6 makes their boldest move yet as Stephen Segovia (Convergence) joins Matt Kindt (RAI) and Butch Guice (Captain America) for the next bloodstained chapter of “THE SHADOW WARS”!

ALL-NEW ARC! JUMP ON BOARD HERE! “THE VINE IMPERATIVE” – PART 1!

Toyo Harada’s war to save humanity by taking over the world roars on against the only enemy this planet cannot contain…a sinister network of undercover alien spies!

A deadly chess game between Harada and the alien visitors called the Vine has been unfolding for decades. The Vine once even created the living weapon called LV-99 to assassinate their enemy, but failed. Today, as Harada executes his agenda upon Earth—and with LV-99 on his side this time—the Vine’s cold war finally turns infernally hot.

Now that Rai’s allies back on New Japan have reunited, they must figure out a plan to retrieve their friend and topple Father’s rule once and for all. Meanwhile, Rai has his work cut out for him on Earth as his past sins come back to haunt him. Luckily for our hero, justice is Eternal… 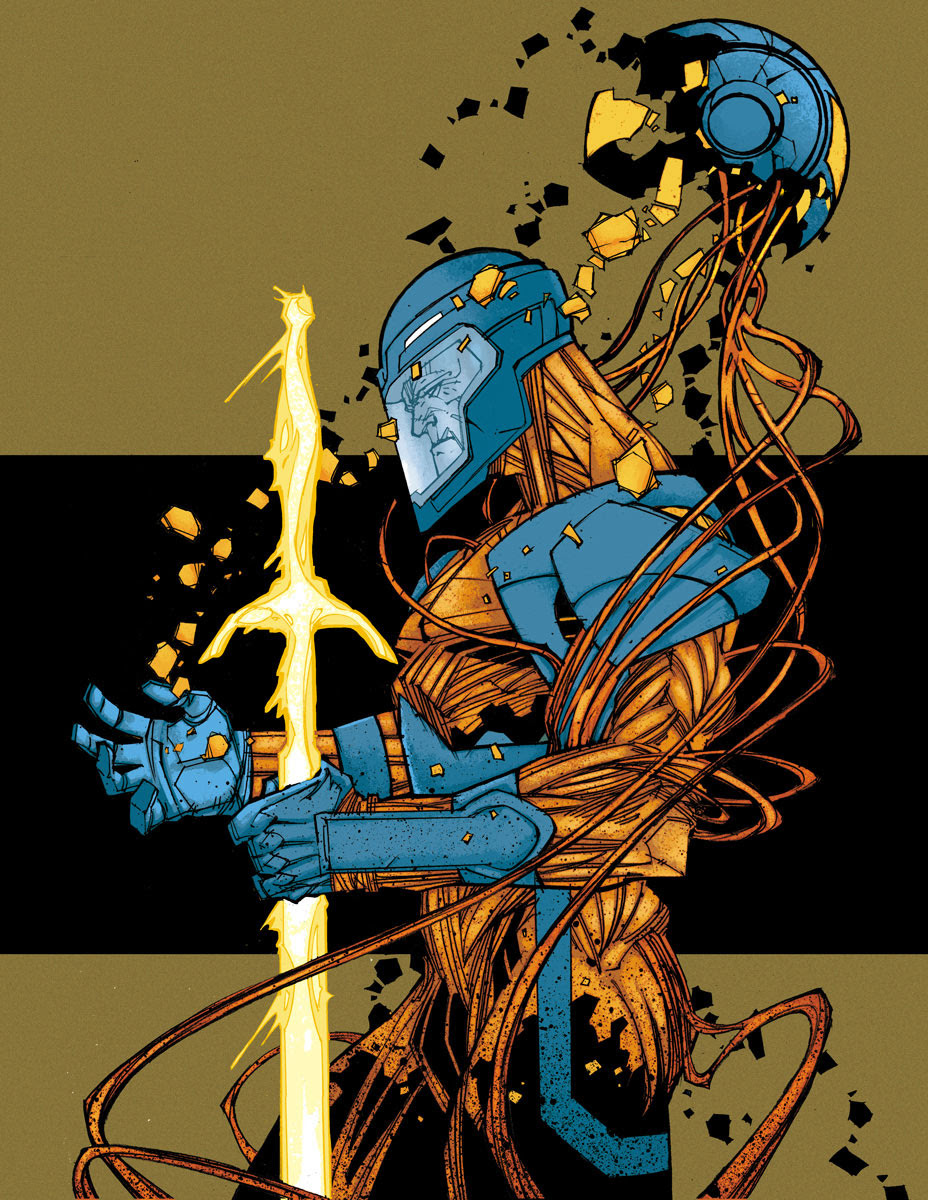 With a conspiracy tearing the Vine and humanity’s tenuous relationship apart, Aric of Dacia takes matters into his own hands to bring peace – but at a dire cost. But when you don’t know whom to trust, you must trust yourself.

The Armor Hunters never leave a man behind!

Deep under the mountains of the American Southwest, Quartz, of the Armor Hunters who attacked Earth, is kept secure in government custody. Escape is impossible from the inside. But can the combined might of the U.S. armed forces, X-O Manowar, and Unity stop a jailbreak from the outside…when that attack is an all-out suicide strike by Unity’s giant killer robot GIN-GR?!

Have you ever wondered what would happen if dinosaurs ruled the Roman Empire? Well, you’re gonna find out!

Ivar & Neela continue their pursuit of the Prometheans through time only to discover some, well, HUGE changes their machinations have made to history! Meanwhile, who is THE RACTUS?! And what does he have in store for Neela?

The world’s most dangerous man, Toyo Harada, has been struck by the one thing he never thought possible – fear. Halfway across the globe, a new power threatens to topple modern civilization and, to preempt the cataclysm that is to come, Harada will unite the most unforgiving team the world has ever known – UNITY. Their mission: defeat the threat responsible for the destruction of MI-6, the decimation of an alien world, and the occupation of Eastern Europe… Unseat the warrior king armed with the universe’s most powerful weapon… Kill X-O Manowar!

An all-new printing of the sold-out volume that Comic Book Resources calls “an immersive experience…unlike anything else in comics.”

The year is 4001 A.D. Led by the artificial intelligence called “Father,” the island nation of Japan has expanded out of the Pacific and into geosynchronous orbit with the ravaged Earth below. With billions to feed and protect, it has fallen to one solitary guardian to enforce the law of Father’s empire – the mysterious folk hero known as Rai. They say he can appear out of nowhere. They say he is a spirit…the ghost of Japan. But when the first murder in a thousand years threatens to topple Father’s benevolent reign, Rai will be forced to confront the true face of a nation transformed…and his own long-lost humanity.

From New York Times best-selling writer Matt Kindt (DIVINITY, NINJAK) and superstar artist Clayton Crain (X-Force, Carnage), discover an astonishing new vision with the acclaimed first volume of the series named one of the Best Comics of 2014 by Wired and Vulture!

There is a secret black market in New York. It is hidden in plain sight – in our streets, trains, and restaurants. Those who know how to navigate it exchange secrets of extraordinary nature. But when the secret in circulation is a biological weapon derived from Vine technology, the gloves are off – and the most extraordinary agents are released to stop the disaster before it occurs. Otherwise, in less than thirty minutes, there will be no world to come back to. X-O Manowar, Archer, Neville Alcott, Detective Cejudo and Betamax are ready to save the world.

Red-hot writer Ales Kot (Bucky Barnes: The Winter Soldier) and rising star Adam Gorham (Zero) go in deep with an unlikely cast of superhuman operators for an undercover conspiracy action thriller in the darkest corners of the Valiant Universe!

A little confused by time travel? Don’t worry, these guys don’t really understand it either. So they’re BREAKING HISTORY!

With the universe on the brink of destruction, Ivar must turn to his closest relatives – Armstrong and Gilad Anni-Padda – to save Neela Sethi from the machinations of the Prometheans! The problem? These three guys couldn’t be further apart. Time doesn’t heal all wounds as the assault on Oblivi-1 begins!

Following in the footsteps of the X-O MANOWAR CLASSIC OMNIBUS VOL. 1, it’s the complete, oversized omnibus collection of the series Ain’t It Cool News calls “the best buddy team book of all time”!

Obadiah Archer, left for dead as a boy by his corrupt evangelist parents, has spent the last decade honing his innate abilities in a monastery deep in the mountains of Ladakh before emerging now as the world’s greatest hand-to-hand fighter and marksman. His body a temple, his every movement in harmony and his mind perfectly serene… except for the overriding desire to avenge his own murder. Armstrong is a 10,000-year-old libertine who may be as strong as a battalion, but abandoned idealism millennia ago. Now he spends his days drinking, carousing and telling tales of outrageous adventures throughout history to anyone who will listen – that is, when he’s not on the run from an ancient cult whose bumbling agents have been hunting him for two thousand years. But Armstrong counts as the worst day of all his days the one when Archer turned up and decided that they were partners – a team chosen by fate to save the world!

QUANTUM AND WOODY BY PRIEST & BRIGHT VOL. 3: AND SO… TPB
Written by CHRISTOPHER PRIEST
Art & Cover by M.D. BRIGHT

This is it, folks! From the legendary creative team of Christopher Priest (Black Panther,Deadpool) and M.D. Bright (Green Lantern, Iron Man), it’s the third volume of Quantum and Woody’s groundbreaking original series, collected in trade paperback for the very first time!

An old enemy returned. An old friend dead at his hands. Once forced to be partners by the life changing accident that gave them their powers or dissipate forever if they didn’t “klang” their control bands together every 24 hours, Quantum and Woody now have an even more important reason to work together: payback. Suited up and armed to the teeth, they’re taking the war onto international arms dealer Terrence Magnum’s home turf. They aim to make him pay for the murder of Taylor 88, and to prove they’re the last things anyone ever thought they could be… Heroes.