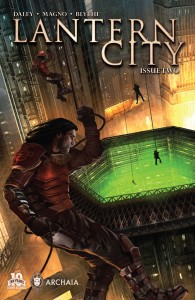 Lantern City #2 (BOOM!)
Writer(s): Matthew Daley, Paul Jenkins
Artist(s): Carlos Magno
Sander has successfully infiltrated the Airborne division of the Guard, the best and most dangerous branch. Posing as a Captain, Sander will have to act like a leader of his unit, despite having no idea what Guard life is like beyond the public eye. His very life depends on it.
——–

At the heart of every good Steampunk story is a struggle of classes… Karl Marx would’ve made a great Steampunk tyrant, if he wasn’t so damn historical and non-fictional.

Sander, a well meaning, mild mannered “everyman”, is convinced that the best course of action he can take to protect his family is to infiltrate the dreaded Airborne Guard division. But his luck is such that he doesn’t just get a hold of any old guard’s uniform. He has the best of fortune in that the armor of a Captain falls into his hands. No worries, right? Everyone knows exactly how a Captain of the Guard would behave away from the public eye, right?

Sadly, this isn’t the case, however Sander is determined to push forward and do his level best. The challenges in front of him number… well, a lot. His “fellow” guardsmen, who may or may not be familiar with his alias, Captain Orlin, stand ready to eliminate all threats to the empire. The rebels, among whom Sander’s niece Lizel can be found, are looking to get some payback against any member of the oppressive ruling class they can get their hands on. Sander’s lack of military training is made painfully obvious on a routine airship drop. Oh yeah, and there’s the little matter of one Sootoh Belm, investigator/inquisitor whose job it is to look into any and all “irregularities” among the guard. It seems that a while back, another man tried to infiltrate the guard, an act which caused all manner of hate and discontent… and a fact which ivestigator Belm is determined to prevent from happening again.

We have here a pretty thickly layered book, chock full of sights and history begging to be explored. The artwork by Carlos Magno is nothing short of outstanding, and the world building undertaken by Matthew Daley and Paul Jenkins is impressive as hell. The characters are all mired in their own motivations, and few of those are the simple black and white of right and wrong… Is Sander really looking to overthrow a corrupt society, or is he a family man caught up in events and doing the best that he can in the hope of making it back to said family? As in most good genre writing, the key is to start with a solid story, and then build a world around it. In my opinion, Lantern City could be that kind of story… Here’s hoping that the beginning is only a glimmer of things to come. 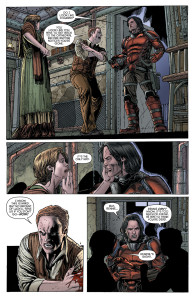 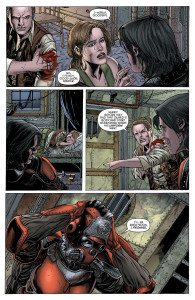 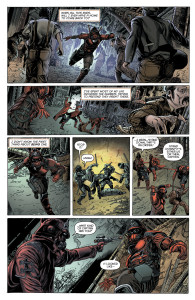 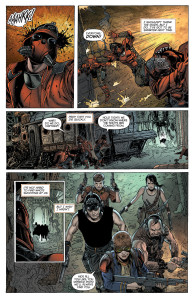 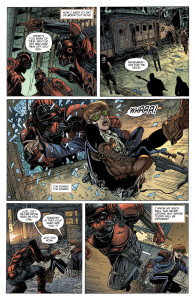