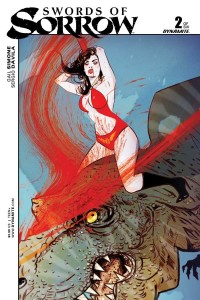 Swords of Sorrow #2 (of 6)
Writer: Gail Simone
Art: Sergio Davila
Genre: Fantasy, Science Fiction
Gail Simone (Batgirl, Red Sonja) and rising star Sergio Davila (Legenderry) team to bring you this epic tale, featuring the most amazing, most beloved, and fiercest pulp heroines of all time! All the great Women of Dynamite are united against an unbeatable horror, and this historic issue features, for the first time ever, characters from the worlds of Edgar Rice Burroughs and Robert E. Howard as Dejah Thoris and Red Sonja clash!
The SWORDS OF SORROW series is also supported by several companion one-shots, written by some of today’s hottest talents, like G.Willow Wilson, Marguerite Bennett, and Erica Schultz!

Throughout the history of comics, notably starting with DC’s Crisis on Infinite Earths, there has been the mega-gigantic, uber climactic, mondo-spectacular Crossover Event. In some cases, it’s been more flash than substance, but occasionally the execution lives up to the idea and readers are given something very cool. I have to say that Dynamite’s Swords of Sorrow is landing soundly in that latter category.

An Evil (pronounced “Eee-vyl”) prince has gathered a force of femme fatales to fight a war. Standing against him is the Traveler, and she’s chosen to fight fire with fire. Her Emissary has made the rounds and presented her chosen few with weapons to fight back. These warriors picked are not by nature “team players”, as is illustrated in this second issue of the main SoS series. Issue one left us hanging with a clash between Martian warlord Tars Tarkas squared off against Hyrkanian she-devil Red Sonja. Giving us the payoff we were hoping for, issue two picks right up where that left off, and doesn’t stop there…

Tarkas is sluggish and weak, as fans know that’s because earth’s gravity is way heavier than on Mars (seriously, it’s science). Sonja takes advantage of that and in a charge takes them both back through the portal from which Tarkas had originally come. That sets round two of the fight back on Tarkas’s home turf of Barsoom (Mars), however it isn’t the big green guy that carries on… he’s replaced by his tag-team partner, Dejah Thoris, Princess of Mars! Now things start to get interesting as Sonja realizes that she’s not on familiar ground anymore (“I have no idea where I am, but I already quite loathe the place”), and Dejah Thoris takes over the home field advantage. I’m not going to go any farther than that, except to say that the cast of characters expands through cameo by Lady Tarzan herself, Jane Porter. We also get to see a few more hints at the conflict to come as Catherine Bell, aka “Bad Kitty”, is ordered into the fight.

Let’s be honest. One of the pitfalls of these massive crossover events is that it rolls over on itself and turns into a publicity stunt, a “Michael Bay” event that’s all flash and no substance. As the story progresses, I really think that it’s going to be the writing that saves the day. Where the artwork of Sergio Davila is great, it isn’t like these ladies have never been well drawn before, as they each carry a resume that include the likes of Frank Frazetta and Boris Vallejo. It’s Gail Simone gives smartitude (sure, it’s a made up word) to characters that are too often treated as eye candy and dismissed as little more than ring girls (that’s a combat sport reference…). Simone gives her characters the respect they’ve earned, because at the end of the day she’s squaring off pulp literature’s leading ladies. Whether they got their start in novels or comics, many have stood the test of time and are going strong today. 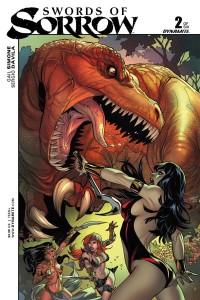 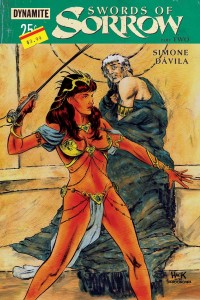