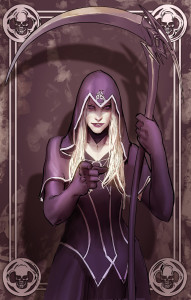 This is almost a personal crusade of mine, as I’m sort of a late comer to Stjepan Sejic’s work as an artist and as a writer.

A short time ago, I posted a review on one of Sejic’s other books, Ravine, which ended in a pretty major cliffhanger after 2 trade paperback volumes. Where in the past he’s had his successes on existing titles, like Witchblade and Aphrodite X, it’s in his own original work that his talent really shines. Work like Ravine, a pretty solid epic fantasy series featuring a cast of great characters, all of whom came across as fully realized and three dimensional people. When I saw that the last book had come out a few years back, I pretty much resigned myself to not knowing what happened next, and just tried to accept that what had come out was quality work at least as far as I’m concerned.

Then I see that this latest series, Death Vigil, is pulling in some pretty high critical praise, but is also in trouble. Sejic is going so far as to post his works, downloadable page by page, at deviantart. This marks him as an artist who is really trying to get his work out there, and I think it’s deservedly so. Based on that, I’m doing my part to put the word out, for whatever that word might be worth to whoever might be paying attention.

Death Vigil follows the after death adventures of Sam Lewis, a good Samaritan who paid for his good deed by getting shot and killed, and Bernadette, a very non-stereotypical representation of the Grim Reaper. “Bernie” has been fighting a war for thousands of years, and along the way she’s recruited her soldiers from the dying, offering them a chance to serve as a guardian for the living. Those who accept the offer are given eternal life as members of the “Death Vigil”, granted impressive powers and abilities to help them in their calling.

The elements that have made Sejic’s other works standouts in my eyes are all present. The dialogue that is witty and quick, without being over the top. Characters that are immediately likeable and not at all lacking in depth. And (again), artwork that should by itself, elevate Sejic’s work in the comicbook creators’ pantheon. His action sequences are dynamic and stylistic without being tough to follow. His use of facial expressions adds to his use of character development, showing as much personality as anything found in a dialogue balloon. Overall, I can’t find anything in Sejic’s body of work that would indicate anything but the highest success to anything he puts his efforts toward. Based on all of that, it’s amazing to me that he seems to be having difficulty maintaining an ongoing series. Hopefully, the word can get out, and we (meaning “I”) can be treated to more of what I’ve already seen. This really is stuff that deserves to be appreciated by more than a handful of followers. 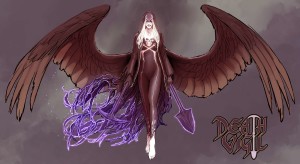 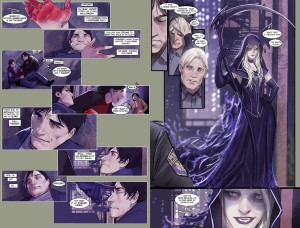 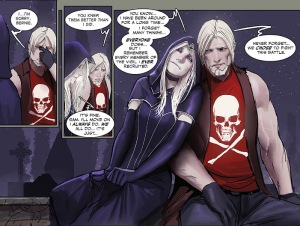 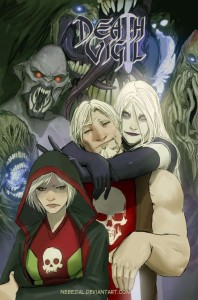