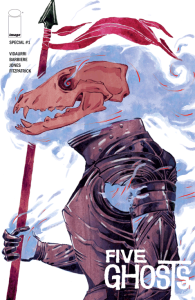 Five Ghosts Special #1
Story By: S.M. Vidaurri
Story By: Frank J. Barbiere
Art By: S.M. Vidaurri
Cover By: S.M. Vidaurri
Explore the mythology of FIVE GHOSTS with a beautiful painted story from S.M. VIDAURRI (Jim Henson Storyteller: Witches, Iron: Or, The War After) featuring knights, demons, wizards, and the Dreamstone! And in a special backup story, FRANK J. BARBIERE presents Fabian in one of the most exciting literary heists ever!

A while back, it was announced that the SciFi (I refuse to go with their new logo “SyFy”… I’m a purist) was going to be producing a series based on this Image comic, and in true form I went and binged on what had been put out there. As a self-published story that got its start through a very successful Kickstarter program, it was a winner from start to finish. Fans of old school swashbuckling adventure should have a lot to get behind. The great twist was, of course, the titled “five ghosts”.

During his career as a treasure hunter, Fabian Gray acquired a mysterious artifact called the Dreamstone. This stone tapped into the shared mythos of literary works, giving them life and power of their own, and implanted the consciousness of five of the most influential and dominant characters. The characters are never actually named in the series, being referred to instead by nicknames or titles: The Wizard (Merlin), The Hunter (Robin Hood), The Detective (Sherlock Holmes), the Samurai (Miyamoto Musashi… kind of unfair as he’s a historical character as opposed to a fictional one), and The Vampire (Count Dracula himself). In the beginning, Fabian is assaulted by the five personalities, each fighting for dominance until they are finally able to come to terms. By giving each of them their time and acknowledging their individual worth, he works out a truce. The benefit of this is that Fabian Gray is now able to access the skills and abilities of each personality, at will and as needed.

That’s what’s come before. This special is more of a history lesson involving the Dreamstone itself. In the first story, we get a look into the past, possibly at one of the first recorded instances of contact with the Dreamstone. We see that Fabian’s managed to come away from his own contact with it in pretty good shape. Even though readers of the series don’t get much of a payoff in terms of Five Ghost action (it’s pretty much just an ongoing fight between an earlier holder of the stone, and a knight), it’s still kind of a cool backstory that highlights the fact that the stone itself is more than just a plot device to kick up the coolness of a protagonist.