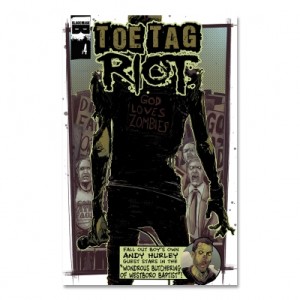 Toe Tag Riot #4 (Black Mask Studios – Miner / Von Gorman / Rauch / Jones)
THE SHOWDOWN YOU’VE BEEN WAITING FOR! It’s our ZOMBIE PUNKS versus the mother-effin WESTBORO BAPTIST CHURCH in an all-out gorefest battle royale!! Who will live? Who will die? What do Shirley Phelps’ guts look like? What part will Fall Out Boy’s Andy Hurley play now that he’s joined the band and gone full-zombie? How absolutely friggin’ insanely awesome will this issue be?! All those questions answered in this final blood soaked masterpiece of comedic comic book carnage named TOE TAG RIOT!
——–

I’d missed out on the first few issues of Toe Tag Riot, so I’ve just blazed through the run so I can give a fully informed opinion on the whole series. I’m going to start by telling you, the intrepid reader, that this series is guaranteed to offend, piss off, and amuse… sometimes all within a single panel. The violence is graphic, and very often gratuitous. The language is at the far end of the “mature audience only” spectrum. The theme is, so far as I took away, complete intolerance of intolerance in any form.

The good news is that Toe Tag Riot, the fictitious punk rock band after which the series is named, is an equal opportunity offender. From skinhead neo-nazis to the Westboro Baptist Church, if there’s a group out there pushing their agenda beyond the realm of good form, they’re lunch. If you can get past all of the things I’ve mentioned, don’t take yourself or your personal viewpoint too seriously, you should be able to sit down and enjoy a comic that was written with tongue very firmly in cheek. For the more serious minded, there’s a dose of social commentary mixed in for good measure.

Toe Tag Riot is a fiercely independent comic, in every sense of the word, starting with a successful Kickstarter campaign. That independence is appropriate given the punk rock attitude and theme of the title characters. In this fictional version of 2004, no one is safe from the abrasive treatment, and that’s as it should be… unless you’re Fred Phelps. He might have a problem with his fate in the comic.

Go ahead and read it… but don’t get mad at me about it. I warned you.