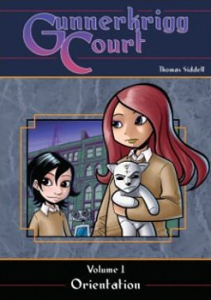 Gunnerkrigg Court (Archaia – Siddell)
Gunnerkrigg Court is a series of books about Antimony Carver, a girl who attends school at gloomy Gunnerkrigg Court. The story is about the people she meets, the strange things that happen, and the things she causes to happen as she and her new friend, Kat, unravel the mysteries of the Court and deal with the everyday adventures of growing up at a school that has robots running around alongside body-snatching demons, forest gods, and the odd mythical creature.
Created, written, and drawn by Tom Siddell

Here’s a little something for the slightly left of center out there… Originally a web comic, Tom Siddell’s Gunnerkigg Court is the story of Antimony Carver and her unlikely adventures at an improbable British boarding school. Don’t let the comic strip look of the book fool you, these stories are as smartly written as anything else out there.

Antimony’s arrival at Gunnerkigg seems pretty ordinary. New to the school, she’s a little out of her element as she explores the seemingly endless halls. Preoccupied with her new situation, Antimony has yet to start making friends when she realizes that she’s not as alone as she thought. Her odd companion, a second shadow that’s attached itself to her, is lost and looking for a way home.

In the next chapter, Antimony and her new friend Katerina team up for an assigned report on any figure of myth. Antimony chooses the fearsome Minotaur of Greek mythology. While looking for books on the subject, the pair find themselves in an old and seldom used section of the library. After a little exploration, Antimony and Kat discover a hidden doorway leading into an actual Cretan Labyrinth (what’re the odds, right?). Suddenly, they’re set upon by the actual dreaded Minotaur of Crete… okay, “set upon” might not be right. The guy was just hanging out in his living room (he’s got a time share) when the girls sudden appearance startled him. Oh, and just for the record, he prefers “Basil” to that whole “dreaded Minotaur” thing.

For fans of stories like the “Series of Unfortunate Events” books, you could do a lot worse than reading this one. Each chapter opens up a little more information on both Antimony and the grounds of Gunnerkigg. If you’re looking for something a little different, a little quirky, with a touch of British wit and sarcasm, give it a look. Let me know what you think.