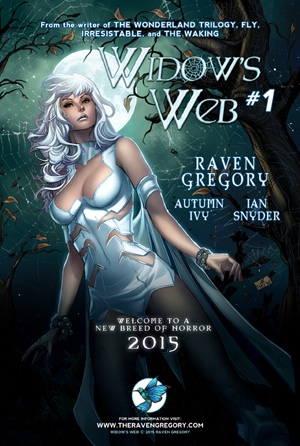 I predict this will be the runaway indie hit of 2015 – our review here!

Set in a world that is not our own, the story follows Dahlia White, an unassuming bartender living in the strange yet familiar Tcesni City as she attempts to balance her life with the horrifying secret of who and WHAT she really is.  A balance that is thrown into absolute chaos when a down-on-his-luck, Pterra Atrus, walks through her door turning her already crazy world upside down.  A world where not everything or everyone is what they seem.

“Widow’s Web takes you down a path that is simultaneously familiar and alien; it’s full of experiences, characters and conversations we’ve all witnessed, as well as those we pray we never will.  Gregory, Ivy and the rest of the creative team have woven their own web that will lure you in and never let you go.” – Drunk on Comics

“The realm of horror is a well-mined landscape filled with werewolves, vampires, ghosts and zombies, but somehow Gregory and Ivy have managed to find a new and terrible thing lurking in the deepest darkest shadows. A new kind of monster and a new breed of horror you don’t want to miss!” – It came from Below

“Grade A+ Nothing short of brilliant all the way around.  Put it at the top of your pull list! Widow’s Web is THE book to read in 2015!” – The Pullbox

“It’s the classic love story of boy meets girl but with the horrific twist that in this case girl may very well EAT boy,” says series co-creator/co-writer Raven Gregory.  “This being my first series since my Zenescope run, I wanted it to be uniquely different than anything I’d written before. Something fresh and new we could bring to the world of fantasy/horror when it comes to the genre of creatures and monsters walking among us.  Something that I think is going to knock the socks off the fans in a big, BIG way.”

To visit the WIDOW’S WEB kickstarter campaign click the following link HERE and for more information on Widow’s Web or any other Raven Gregory titles, visit www.theravengregory.com, or follow the latest updates on www.facebook.com/raven.gregory