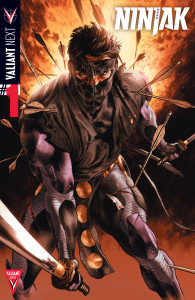 Ninjak #1 (Valiant – Kindt / Mann / Guice)
Every master spy… had to start somewhere. This March, the past and future of MI-6′s deadliest operative collide in the pages of an all-new ongoing series from VALIANT NEXT!

Valiant is proud to present an advance preview of NINJAK #1 – the FIRST ISSUE of the long-awaited VALIANT NEXT ongoing series by New York Times best-selling writer Matt Kindt (THE VALIANT, Mind MGMT), and superstar artists Clay Mann (Gambit) and Butch Guice (Captain America)! On March 11th, the search for the Shadow Seven starts here as Ninjak begins an international manhunt for the secretive figureheads behind the Webnet terror network…and unearths their classified connection to his own never-before-revealed origin and training!
——–

This book is overall a pretty natural fit for my typical reading pile… Come on, my generation grew up watching Sho Kusugi slice and dice his way across the movie screen in glorious full color sprays of arterial red. Movies like “Revenge of the Ninja” created a whole slew of boys who dreamed of felling foes, hurling shuriken like a machine gun, and swinging the deadly ninja-to to right the wrongs.

Valiant’s done a great job with the resurgence of their flagship titles (XO Manowar, Bloodshot, and Harbinger to name a few). Now they’re pulling Collin King up to first string, and it’s about time! We’ve seen him in the pages of Valiant’s other books, most notably Unity. Now we get some welcome backstory on one of Valiant’s (in my opinion) more interesting characters.

Basically, for those not familiar with the character, Ninjak comes across as Valiant’s answer to Marvel’s Hawkeye. He’s down for the dirtier deeds that need doing, and he’s all about doing them with style. His mastery of the shadowy arts is bolstered by a slew of gadgets, some of which get the bonus blueprint treatment in the premiere issue. This is a great jumping on point for new readers, as we’re getting some great insights into the character and history of Collin King. We get to watch his early missions with MI-6 (What? A ninja working covert ops for the same outfit that turned James Bond loose on the world? Take my money!), and his development into the uber-cool action hero he really should be.

I’ve seen Ninjak in action in other books, and I look forward to seeing him carry the spotlight on his own merits.