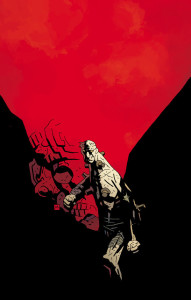 Mike Mignola opens up another corner of his wide, wide world. He began this world when he introduced us to a fella named Hellboy. The universe enveloped the dark corners, the twisted figures seen from the corner of your eye. Mike Mignola gave us monsters, and we love him for it. But this time, we aren’t being introduced to another of Mignola’s creations… we’re continuing the story started by a young Ms. Shelley, back in 1818. This story brings the creation of Victor Frankenstein back into the light.

Mexico, 1956. Through a series of events, “the monster” has found his way to Mexico. Once again, he’s hunted, and again he’s looking for a place to go to ground. Luck or fate brings him to an ancient place of worship, where the old gods are still close by, waiting for something. Wounded and tired, Frankenstein’s monster falls into the care of an old woman who still honors these old beliefs, and understands the monster for what he is: a victim of the very human tendency to crush, cage, or destroy anything that doesn’t fit.

With a touch, the old woman sees the long history of the monster and heals his hurts. She shows him that he could, and does, have a place in the world. She tells him that luck had nothing to do with his winding up in this ancient place.

Of course, peaceful resolutions make for boring stories. The Marquis Adoet de Fabre has collected a sizeable coterie of misfits and oddities, and sees Frankenstein’s monster as his next acquisition.

True to form, Mike Mignola, along with artist Ben Stenbeck, pulls the reader into a world where the script has been flipped and those traditionally viewed as monsters turn out to be people. Just folk, looking for the things anyone would want. At the very top of the monster’s hierarchy of needs, a place to live in peace, to be accepted is the prize.

This is a five issue mini-series. In those five issues, we’ll see if our protagonist (I actually feel bad having to keep referring to him as “monster”… seems like a decent enough fella) manages to make the climb. I’m looking forward to the ride.