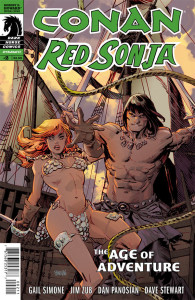 Conan Red Sonja #2 (Dark Horse – Simone / Zub / Stewart)
Conan and Red Sonja unite to stop a sorcerer-priest from creating a new age in Hyborian warfare! Exposed to a deadly toxin, barbarian and she-devil race against time to save themselves

The team up that everyone who grew up reading the old pulp fantasy novels wanted continues… This issue picks up six years after the events of the first in this run. Conan and Sonja are well on their way to becoming the epic heroes of legend. They’ve done some stuff, they’ve learned a thing or two, and when crazy-random-happenstance throws them both together, the steel clashes and the sparks fly.

Sonja and her friend Annisia, fresh from a three year stint as captives fighting in a gladiator pit, have signed on with a crew hunting sea faring slavers. Conan is the middle of his torrid love affair with Belit the pirate queen. The former mistakes the latter for slavers, and it’s an all out melee until things get sorted out. Conan and Sonja remember their first meeting well, and we go from sword fighting to partying and drinking with a turn of the page. In the end, their forces combine, and they go to investigate a mysterious rash of disappearances. The evil sorceror Thoth-Amon rears his ugly head, and the actions kicks up again.

Hey, it’s not Shakespeare, but it isn’t really supposed to be, is it?

Gail Simone and Jim Zub have a great handle on the personalities of two of pulp fictions greatest heroes. The dialogue between Conan and Sonja shows the camaraderie of two kindred spirits. There’s no romance here, so if that’s what you’re looking for you might as well start hitting the fan fiction sites. The thing that gave me a chuckle here is that the writing almost gave me the impression that the supporting characters of Belit and Annisia are well aware of their status in the grand scheme of things.

The art by Dan Panosian is great, looking like it’s taken right out of the old pulp comics… But, um, maybe we could give Sonja something a little more practical to wear? I’m all for purism to some extent, but come on.

All in all, this continues to be a fun title. If there’s going to be an ongoing storyline that brings it all together, that would just be icing on the cake. For now, it’s just kinda fun to watch these two classic and iconic characters lay the smacketh down.