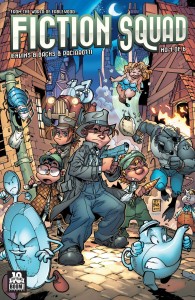 Fiction Squad #4 (BOOM! – Jenkins / Bachs)
It’s only a matter of time before war erupts between the nations of Oz and Wonderland. Tensions are at an all-time-high as crime runs rampant throughout the town of Rimes. Detective Frankie Mack is in the middle of a ticking time-bomb and he knows it. With the help of Simple Simon and the kid detectives, he may just find his way to the maniacal mastermind in time.
—————
Detective Frankie Mack works the mean streets of Rime, the storybook realm where all of nursery rhymes and fables ever told come to roost… But remember that every nursery rhyme starts out with a crime scene.

There’s a conspiracy in the works. Frankie is moving uphill and against the wind as he discovers how deep the rabbit hole goes, and how high the corruption spreads. His partner, Simon Simpleton, isn’t much help. He’s accidentally kicked off a full-fledged turf war between the Queens (Heart, Spade, Club, and Diamond) and the Witches of Oz. Frankie’s only link, the one person who might have an idea of who it all ties together, is one Humpty Dumpty… and he’s a tough egg to crack.

To make matters even worse, Frankie is haunted by the reappearance of an old enemy from his origin as the subject of a failed mystery novella. He never caught his culprit because the second part of his story was never written, and now this shadowy figure is lurking the streets of Rime.

Fiction Squad is a lot of fun to read. The puns keep on coming, and the hidden references tend to jump out and smack the funny bone. The references and jokes aren’t always obvious, so make sure you’re paying attention.