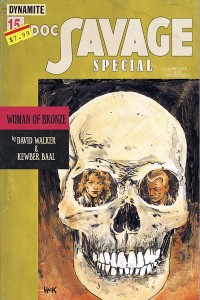 Doc Savage Special (Dynamite – Walker / Baal)
Known as the cousin of world famous adventurer Doc Savage, Pat Savage wants nothing more than to prove she has what is takes to be a hero. What starts out as a thankless job as a babysitter, soon turns into an epic life-and-death struggle that finds Pat squaring off against sinister forces. It’s a double-size tale of two-fisted action starring the first lady of pulp adventure, Pat Savage, Woman of Bronze.
——–

Okay, the holidays are behind us all, so I’m hoping that I can get back to cranking out the comic write ups… Hope you all had you fill of fruitcake and gingerbread, but we need to get back to something serious. Something like………. Doc Savage, the Man of Bronze, international adventurer, and pulp action icon!

Okay, so maybe not Doc himself… He’s here in the book, but he takes a bit of a back seat to his cousin. Pat Savage is the owner of hair salon, expert in martial arts (she has a kung fu “wooden man” in her back office for when she needs to “blow off some steam”), and a master marksman. She’s been bugging Doc to let her join his team of adventurers for some time, but hasn’t made the cut just yet. As this story opens up, it looks like she’s going to get her chance.

Doc’s asked Pat to keep an eye on the young daughter of a friend of his, Japanese robotics scientist Professor Cheh Fu-Sheng. She’s upset at being relegated to the lowly position of “babysitter”, but it turns out that this gig is no picnic. Unless your type of picnic is full of ninjas, gunfights, car chases, airplane rides, and parachute jumps onto the deck of a ship loaded with badguys. Okay, so as it turns out this is the perfect sort of picnic for Pat. With all of the enthusiasm of her adventurous cousin, she leaps into the fight feet first, and along the even ends up ripping her shirt… that bit must run in the family.

Again, anyone who’s read any of my posts here should know by now that I’m a fan of most things pulp. Except orange juice. Not my thing. This, however, was a great time. If you’re into adventure for its own sake, this is the sort of thing you might enjoy. Give it a shot.