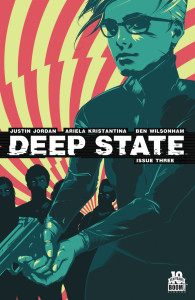 The Cosmonaut invasion is perilously close to becoming public as Control agents Harrow & Branch struggle to seal off the rural Pennsylvania town while also saving its populace from the thrall of the mysterious presence.
——–

This story has elements of classic modern day sci fi, as well as themes taken from old shows like the Outer Limits. Control comes across as a combination of MIB and the X-Files, and Agent Harrow takes on the role of the wise cracking, hard bitten and jaded operative who’s seen it all. So when Harrow starts to act a little nervous about the current events around him, his new partner, Ms. Branch, has the right to feel a little pressure.

The beauty of this book is in the artwork. It skirts the line between too little and too much detail very well. The things the invader has done to gain control of the town’s people are hideous. The image of the first victim, pinned to a wall like a biology student’s butterfly collection, is a dark and haunting one. If there were more detail to the imagery, I’d say the series was moving quickly into over the top shock content. Ariela Kristantina is an artist who deserves the title.

The dialogue between Harrow and Branch is very reminiscent of Scully and Mulder’s banter in the early days of their partnership. Ms. Branch is still learning that there are things out there that she would have been better off not knowing about. The fact that Agent Harrow is still sane enough to form complete sentences after all that he’s seen is a testament to his character. For all of that, we have the writer, Justin Jordan, to thank. He’s going an outstanding job of building these two characters up from the ground floor, and still giving us enough insights into them both to show that they’ve been around and have a history. I look forward to seeing that history unfold.

Two solid and exuberant thumbs up.