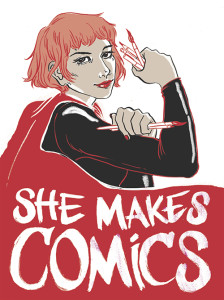 Sequart and Respect! Films are proud to announce the release of their latest documentary, She Makes Comics, a film spanning the history of women in comic books as creators, fans, and everything in between. The film is directed by Marisa Stotter and produced by Patrick Meaney and Jordan Rennert of Respect! Films. It is executive produced by Sequart’s Julian Darius and Mike Phillips and by Columbia University comics librarian Karen Green. She Makes Comics tells the little known story of women in comics, highlighting the contributions they have made to the medium since the turn of the 19th century. It features interviews with such prominent figures as historian Trina Robbins, Captain Marvel writer Kelly Sue DeConnick, underground comics artist Joyce Farmer, and former DC Comics publisher Jenette Kahn, among dozens of others.

She Makes Comics is now available to order on DVD and as a digital download at SheMakesComics.com. The movie ships on December 9, and all U.S. orders placed by December 16 will be shipped in time for the holidays. Respect! Films, whose previous credits include comics docs Grant Morrison: Talking with Gods, Warren Ellis: Captured Ghosts, and The Image Revolution, crowdfunded She Makes Comics through Kickstarter, raising $54,000 with nearly 1500 backers.
——

Watching this video brought a few questions to my mind… First and foremost is, how many great characters and titles have we lost to the “Mad Men” mentality over the years? Looking back over the history of comics, this movie sheds some light. One thing that surprised me was actually how many women were involved in the Golden Age of comics at a time when women were expected to stay at home. Another surprise was how badly women were pushed out of the comics industry in the 90’s, when the boys over at Image set up their boys only club.

I’ve been reading comics since the ’70’s, and over time I’ve developed some favorite artists and writers. I’ve got favorite characters and titles, and I appreciate great writing and deep characterization. While the inner-teenage boy in me appreciates the… ahem… character design on characters like Red Sonja, it never occurred to me how deeply her “I don’t need a man” attitude might’ve hit her female audience. Yet “cosplaying” pioneer Wendy Pini (Elfquest co-creator) says that Sonja really nailed the independent spirit that all women should embrace… chain mail bikini notwithstanding.

DC’s Vertigo comics line was hailed as producing some of the industry’s greatest works, before or since. If you’ve enjoyed titles like “Sandman”, “Hellblazer”, “V for Vendetta”, or “Preacher”, make sure you give a thank you to Karen Berger. Working for DC comics through the late 70’s and into the 80’s, she was put in charge of the Vertigo line in 1993.

It’s gems like these that made this video an interesting one to watch. At the very least, pay a little more attention to the creative minds out there, and ladies of the past who led the charge in an industry that hasn’t always been easy to get into.