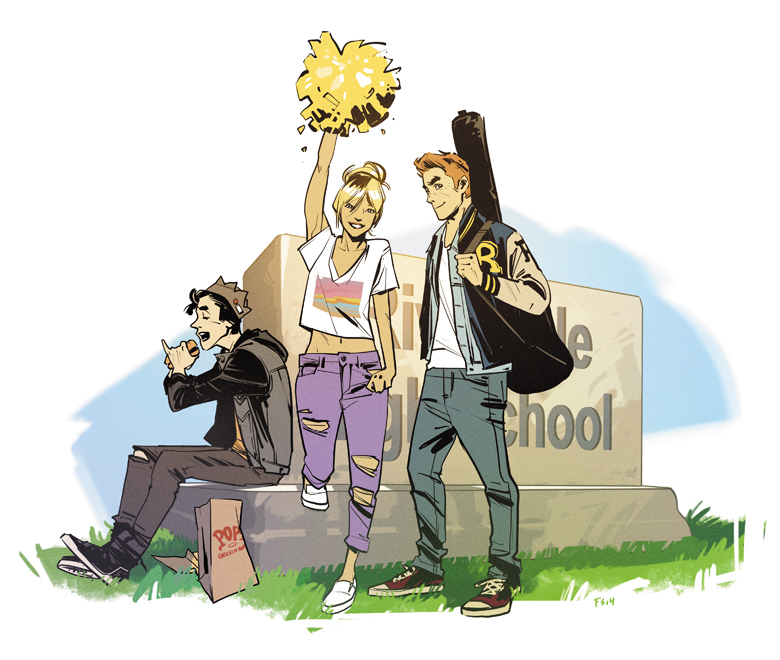 Archie Comics, the acclaimed and bestselling comic book publisher that is home to some of the best-known pop culture creations in the world, including Archie, Jughead, Betty & Veronica, Josie & The Pussycats, Sabrina the Teenage Witch and the hit AFTERLIFE WITH ARCHIE and CHILLING ADVENTURES OF SABRINA horror series, announced today that the company will relaunch one of the longest-running comic series in history with a new direction spearheaded by two of the most acclaimed and best-selling creators in comics today.

ARCHIE #1, hitting next year from writer Mark Waid and artist Fiona Staples, will reenergize the story of Archie and his friends, presenting for the first time ever the origins of everyone’s favorite redheaded teen and his friends while showcasing the beginnings of the historic love triangle between Archie, Betty and Veronica.

The new series will focus on the strengths of the popular characters, their world and harken back to the comic’s humorous and edgier roots, said Archie Comics Publisher/CEO Jon Goldwater.

“The Archie characters aren’t in need of a tune-up, ‘shocking change,’ or revision. These characters have stood the test of time and resonate to this day – we’ve proven that over the last six years,” Goldwater said. “What ARCHIE #1 will do, though, is bring together two of the most talented creators in comics in Mark Waid and Fiona Staples and create a surprising and definitive take on Archie’s origin – a story that has never been. The book will bring back some of the bite of Archie’s original tales in a modern, forward-looking manner, while still retaining the character’s all-ages appeal. What better way to celebrate 75 years of Archie Andrews?”

Waid, no stranger to major comic book storylines – having penned DC’s Kingdom Come, often cited as one of the best comic series in history among many sterling credits – will bring his knack for reinvigorating long-running properties to create a comic that not only presents Archie and his friends squarely in the present, but also turns up the humor. The story will get its visual personality from the unique direction and presentation of Fiona Staples, the artist on the perennial bestseller and critical darling comic series Saga.

ARCHIE is poised to combine two of the industry’s biggest and most innovative talents as they define some of pop culture’s most memorable characters for fans of all ages.

The groundbreaking relaunch kicks off a bold and multi-platform celebration of 75 years of Archie starting in the latter half of 2015 and rolling through the anniversary year of 2016. The “Archie 75” celebration will include: