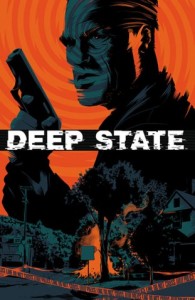 Harrow and Branch’s investigation of the long-lost Soviet lander’s crash site leads them to a small town in rural Pennsylvania. Before the mysterious force is able to take control of the townspeople and enact its full plan, the Agents of Control must isolate the town from the world and eliminate the menace.
——-

Bedford, Pennsylvania… Looks like a nice little town. Quiet. Peaceful. The sheriff knows everyone by name, first and last, and everyone waves hello. It really is too bad that when the invasion starts, it starts here. Agents Harrow and Branch, members of a beyond secret government agency tasked with keeping the general public safe and ignorant to what’s really “out there”, are racing to prevent Armageddon. Mulder and Scully would’ve called it quits, and been considered the wiser for it.

The story starts out at a brisk walk. We’re introduced to a couple supporting players, given some background and a few hints as to what’s at stake. When military vehicles start blocking off all access to Bedford without local law enforcement’s knowledge, when Agent Harrow starts talking about “fuel air bombs” and “sterilization”, it’s a safe bet that the stakes are pretty high. When the townsfolk start disappearing, one by one, picked off to be used as worker drones, there’s a feeling of growing dread. When Harrow and Branch find… him, the first victim of whatever came down on the Soviet moon lander… I guess I can just say that “fuel air bombs” don’t sound so bad.

I really like the writing and the artwork in this title. There’s nothing going on that isn’t defined and laid out with enough attention to detail to leave you wondering about what you can’t see. A great read, if a little creepifying at times… Looking forward to what’s coming.