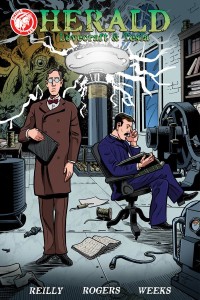 When Nikola Tesla’s fiancée, Amelia Earhart, steals a dangerous prototype engine for a trans-Atlantic flight, Tesla seeks out the interdimensional expertise of HP Lovecraft to save her. Lovecraft, however, has problems of his own as he investigates the identity of Cthulhu’s Herald.

As the two unlikeliest of heroes, Nikola Tesla and H. P. Lovecraft, continue on their quest to discover the extra-dimensional pathway that has stolen Tesla’s fiance Amelia Earhart, their investigation takes on a search for the unholy grail… The Necronomicon.

I don’t think it’s unfair to say that there couldn’t be two more different partners. Where Tesla works under the very scientific understanding that all things can be understood through proper study and methodology, Lovecraft knows beyond all shadow of a doubt that there are things well beyond knowing and understanding. Their differences aren’t going to make this pairing easy or smooth, but in this second issue we’re starting to see that when their forces combine they will be a force to be reckoned with.

This issue also brings us a little farther into Lovecraft’s world. Readers of his fiction (don’t tell him I called it that…) will know that the more that is known about those other worlds and beings, the closer to total insanity we are. We’re given this insight as we see more of Howard’s mother, as well as the obvious quirks and compulsions at work in Howard Phillips Lovecraft himself. The story rolls along at a fine pace, giving us enough insight and character development to make this more than a flash in the pan dip into the alternate history genre. There could very well be great things coming… I’m looking forward to the ride.