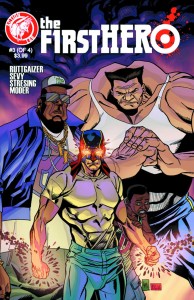 The F1rst Hero #3 (Action Lab – Ruttgaizer / Sevy / Stresing)
Using his new powers to save the life of a troubled young extrahuman has landed Jake Roth in the middle of an armed stand-off with the police and the army’s Extrahuman Task Force. How could things get any worse? Wait until you see who comes to Jake’s rescue!

The book opens with a look back in time, the day after President Ronald Regan was shot… only in this alternate history, Regan wasn’t shot. He was attacked by an “extrahuman”, a person gifted/cursed with super powers. The Brady Act, in our world meant to establish gun control, institutes a government sanctioned task force meant to control or neutralize these extrahumans.

In another interesting twist of the old story, what happens when someone gets super powers, has the world at his fingertips, and pretty much wants nothing at all to do with the whole mess? And then what happens when that person gets caught up in a standoff between the police, the government “Brady Troopers”, and a group of extrahumans who have decided to grab fate by the horns and gather their kind together… ostensibly so they can “take care of their own”, but there’s also the “homo superior” factor mixed in as they throw caution and regard for ordinary human lives to the wind in favor of this new race.

Issue 3 (of 4) is extra heavy on the action, giving us an unobstructed look into the heavily one-sided fight. The team of Bomb Squad, Basher, and others are led by the “us versus them” Alvin (don’t snicker, maybe he hasn’t had time to pick a cooler name) as they crush, toss, and blow up anyone and anything that’s in their way. Meanwhile, reluctant extrahuman Jake Roth (the Luchadore on the cover) wants nothing more than to go home as events spiral out of control around him.

All in all, the book gives us a different sort of perspective on an old storyline made rote in comics… When everyone is against you for no better reason than that you’re you, and those like you are out of control, how do you pick a side?