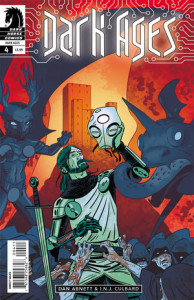 Guardians of the Galaxy’s Dan Abnett!

When a godless mercenary war band discovers an ancient and bizarre piece of alien technology, they find themselves enlisted in the violent conflict against cosmic demon invaders!

* From the creators of Vertigo’s The New Deadwardians!

A ways back I reviewed issue one of this mini-series, and I gave it my stamp of approval. What I reviewed was a medieval action piece, with a hefty dose of demons and possession thrown in to keep things interesting. Anyone who’s stuck around for the series has found out that I was totally reviewing the wrong book. What we have here is “Knights and Aliens”.

Captain Hawkherst and his band of mercenaries are holed up in a monastery, surrounded by a demonic army. On every side, beasts and horrors from the pits of hell are looming, preparing for a final attack. In common parlance, that’s known as a “target rich environment”. Advised and aided by “the Voice”- what looks like an alien robotic head harnessed to his chest, saved from mortal wounds and gifted with a mechanical arm to replace one lost in battle, Hawkherst has become a lynchpin in what turns out to be a galactic struggle. Hawkherst has given his benefactor, the Voice, his trust. The men trust Hawkherst, and will fight to the Gates of Hell for him.

The aliens don’t stand a chance.