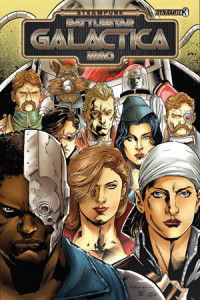 As Starbuck and Athena face a terrifying enemy under Carillion, and Apollo, Boomer and Jolly face Baltar’s Cylonic Giants, the Aethership Galactica heads to Gemini to stop an invasion! But will it be their greatest battle – or their LAST? Come with us on this Steampunk re-imagining of Battlestar Galactica by #1 New York Times bestselling author Tony Lee!

The Colonies are in disarray, their forces decimated and scattered. The Aethership Galactica is pronounced destroyed by Baltar and his clockwork Cylonic warriors. Arch-Duke Adama is believed to be dead. The only thing holding Baltar back is the fact that his forces took more damage than he’d anticipated.

Instead of pressing the attack, Baltar chooses to regroup and pull his forces back to resupply and gather reinforcements. Then, while mankind is still reeling from his initial attack, he can bring his clockwork army back and claim what’s left of the Colonies as his own.

The Crown Prince Apollo, still stranded on the prison planet Helia, is devising a plan to get his people back into the fight. With the help of Boomer, Jolly, and Count Iblis, he believes they have the key to victory. With the fate of Colonies still in the balance, the chance that their plan could blow them all to pieces is a risk worth taking.

Starbuck and Lady Athena have escaped the pirate forces that had been pursuing them, but have been captured by the insectoid Ovions. They’re only hope is to enlist the aid of the Ovion Queen. To do that, Athena is going to have to make a bargain that could cost her everything.

Sounds dramatic, huh? This is the stuff of Steampunk. Over the top storylines involving daring-do and swashbuckling shenanigans. Issue three picks up at a more easily followed pace, slowing down a bit so that the reader has a chance to catch a breath and get a little investment in the multiple storylines. That isn’t to say that the pace has been throttled back… If anything, it looks like this is just a downshift into “passing gear” before slamming down on the gas and rocketing through the Aether at full speed.

I like how the elements of the original series are being used, but old stories and plots aren’t clung to. This allows both old and new readers to get into the series, experiencing the new directions and discovering the Steampunk universe that writer Tony Lee, and artist Aneke have laid out for us. My only critique is in some of the leaps they take to move the story along… Apollo and Starbuck meeting up and going from “I should shoot you where you stand, traitor” to “I love you, Brother!” in the course of two panels is a little quick. I might’ve been played out over a longer period and given the story a little more character development.

Then again I’m just a comic book fan, not a critic, so I give it a very enjoyable B. Move along.