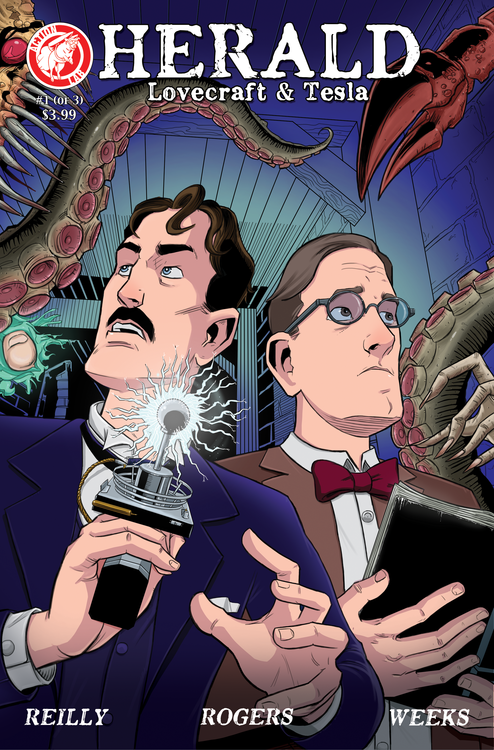 Herald: Lovecraft & Tesla #1 (Action Lab Entertainment – Reilly / Rogers) HP Lovecraft and Nikolai Tesla team up to save the girl and stop ancient evil in HERALD#1!
Preorder it now in @PREVIEWSworld !

When Nikola Tesla’s fiancée, Amelia Earhart, steals a dangerous prototype engine for a trans-Atlantic flight, Tesla seeks out the interdimensional expertise of HP Lovecraft to save her. Lovecraft, however, has problems of his own as he investigates the identity of Cthulhu’s Herald. Variant cover by Colin Dyer, limited to 1,500 copies!

In the current trend of stories being pulled from the pages of history, given a few twists and tweaks to give us something new, it’s easy to get lost in the jumble. That really shouldn’t happen with this series. Here we have two of the most unlikely of heroes, joining forces under the most unlikely of circumstances.

Nicola Tesla, an under appreciated genius in his own time, by all accounts bringing us leaps and bounds forward through his creations. It was only in his personal choices that he fell victim to mediocrity and obscurity.

H. P. Lovecraft, a man haunted by the visions he brought to life through his writings, still being honored today. If you read the word “Lovecraftian” as part of a description, anyone familiar with his work is given a very good idea of what to expect… tentacled monstrosities and soul rending terror.

Action Lab brings these two together in what could very well be a great example of “alternate history” story telling. Tesla’s fiance, Amelia Earhart, has vanished during her history making trans-Atlantic flight. It turns out that she had used one of Tesla’s inventions, a prototype engine the likes of the world has never seen. As Tesla tries to put together the pieces of the puzzle, he discovers that the energy given off by his engine could tear open the fabric of reality and catapult the passenger(s) into any one of an infinite number of realities.

Enter H. P. Lovecraft, by all appearances meek and mild-mannered, but expert in all things mystical and macabre. If Tesla can convince him to leave his mother’s basement, Lovecraft may be the only one who can trace the lost Amelia and aid in her return. The two will have to overcome their differences and find a way to merge their areas of expertise. If they can manage it, they just might rescue the damsel and hold off an inter-dimensional Armageddon.

An original storyline that unites two of history’s more interesting characters, the series has a lot to live up to. Judging by the first issue, they’ve got a good start. Survey says…