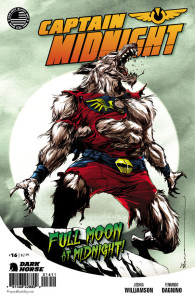 Something’s stirring in the night, creeping and skulking at the edges of sight! A threat more savage than Captain Midnight’s faced before: a canine danger from fable and lore. As the darkness grows and the shadows deepen in this sinister story, you’ll be HOWLING for more!
* A special Halloween issue!
* Written by Joshua Williamson (Ghosted, Masks and Mobsters)!

Flip open this book, and wander back to the “thrilling days of yesteryear!”

That was my first thought as I started reading Captain Midnight. This comic could have been written back in the heyday, the Golden Age of superheroes. You’ve got your larger than life, yet very humble and honorable hero. There’s thrills and chills (hey, it’s the Halloween issue…) to be had, and daring do’s to be… uh… done. This is high adventure in the forum that shaped a generation, and I feel pretty good about giving it two thumbs up.

Capt. Midnight and his friend, government agent and absolutely NOT a sidekick Jones, are helping the sleepy little town of Nightshade, Nevada (really? “Nightshade”?) in picking up the pieces after a vicious attack of the villain Tempus wreaked all kinds of havoc in an attempt to kill Capt. Midnight. Midnight, in true heroic fashion, is determined that the town won’t suffer like that anymore because of his presence. He’s also determined to bring the “hero” back, letting his presence serve to remind the folk that they have a protector.

This wouldn’t be a Halloween issue if there wasn’t some spooky hijinks… With that in mind, Jones finds his way into a creepy old second hand store in search of a gift for Captain Midnight. He’s approached by the requisite spooky (and yet kinda hot) second hand storekeeper. She gives him an old-fashioned radio, to go along with Midnight’s “old soul”. And then…. well, y’know… stuff happens. Look at the cover, should give you some idea.

As a throwback style comic book featuring a throwback style superhero, Captain Midnight does its job and it does it well. Midnight is the hopeful, optimistic hero, and on his watch we’d all be able to walk a little safer and stand a little taller. Good stuff, if you’re not too jaded to let yourself enjoy it.