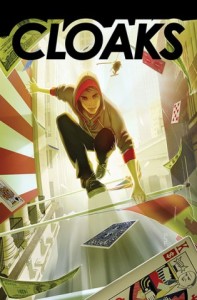 In the Big Apple, a highly skilled street illusionist named Adam blows the minds of crowds with logic-defying acts, while surreptitiously using his artistry to steal from corrupt Wall Street investment bankers and re-distribute their ill-begotten wealth to those in need. He’s a modern-day Robin Hood, but his travails garner the attention of the local authorities. While evading their pursuit, Adam is confronted by three suits and quickly ascertains that freedom has a cost—in order to maintain his liberty, he must join this clandestine Black Ops organization simply known as CLOAKS.

This title caught my eye because of an obvious (to me, anyway) comparison to the movie “Now You See Me”. I liked the movie more than I thought I would. With that in mind, I dove into the sample of Cloaks #1, and got what I was looking for out of it.

The story brings us into the Robin Hood world of The Kid, a street magician with a rogue’s appeal. We don’t have much time to get too far into The Kid’s motivations, but he uses his skills to steal from the rich and (presumably) give to the poor… we don’t get that far in the sample, but it’d be kinda tough to sell a comic title if he just plain stole and then called it a day.  I’ve got some interest in the title, and The Kid seems like an interesting protagonist so far. I’d like to see some more, so as an introduction it looks like the first issue does its job.

The writing brings us the promise of some wit and banter, always a plus if you’re interested in more than just people in tights whupping on each other. The art is crisp and detailed, so I’m hoping to see some action in the future that can do the fine work some justice.

Final thought: What I’ve seen so far has me interested in seeing some more, if for no other reason than to see what direction the folk at the helm have in mind. Give it a look if you’re on the hunt for something besides the obvious Supers out to save the world.