Dynamite Entertainment proudly announces that its flagship title and longest-running comic book series, Army of Darkness, will launch with a brand new #1 issue in December. Cullen Bunn, the celebrated writer of Deadpool, will take iconic horror hero Ash Williams somewhere he has never been before: outer space. Longtime franchise fans are invited to strap themselves in for the bold new direction, in a series featuring interior artwork by Army of Darkness staple Larry Watts, as well as cover artwork by industry heavyweights, including Gabriel Hardman, Tim Seeley, Art Adams, Walter Flanagan, and Jay Shaw.

Ash Williams, the hero of horror franchise Army of Darkness and reluctant “Chosen One” in the war against demons, has encountered so many strange happenings over the years, but nothing could have prepared him for his latest misadventure. Catapulted into the depths of space, Ash must confront the Deadites in a place where no one can hear his screams… or his chainsaw… or his boomstick! What do the forces of the evil dead want with the International Space Station… and can our square-jawed protagonist prevent Armageddon?

“Ash is kind of the ultimate screwball knucklehead, and he really has no business being the ‘Chosen One’ in the battle against ultimate darkness. That’s what makes him such a compelling underdog,” says Bunn, whose new Army of Darkness series follows on the heels of his contribution to November’s Army of Darkness #1992.1 one-shot special. “With this new series, we’re taking the ‘fish out of water’ storyline to the next level, because not only is Ash fighting the Deadites, he’s doing so in the depths of space! With such a strange set-up, it might be easy to think that this is a big departure from what we’ve seen before, but my goal has been to make this ‘feel’ very much like it belongs in the same family as the source material, even though the setting is so vastly different.”

Cullen Bunn is a freelance writer perhaps best known for Marvel Comics’ popular Deadpool and Magneto series, as well as the Oni Press series The Damned and The Sixth Gun. He is also a short story writer and novelist; his major publications outside of the comic book sphere include Crooked Hills and Creeping Stones & Other Stories. He has been nominated for the Bram Stoker Award (2012), the Eisner Award (2012), and the Ghastly Awards (2011), and is the winner of Broken Frontier’s “Best Writer Independent” Award (2011).

Army of Darkness is a 1992 fantasy/comedy film with strong horror elements starring Bruce Campbell (Burn Notice) and Embeth Davidtz, the third installment in a trilogy featuring reluctant hero Ash Williams.  Directed by Sam Raimi (Spider-Man), the film saw its tough-as-nails, wise-cracking protagonist transported from the modern era to the Dark Ages in his continuing war against demonic evil. Army of Darkness generated a dedicated fan following for its premise and lead actor.”Cullen Bunn has been tearing up the comic book universe with his work on Deadpool — an offbeat, unpredictable explosion of mirth and mayhem — and it’s just that sort of frenetic storytelling that makes Cullen the perfect fit for the Army of Darkness world,” says Nick Barrucci, Dynamite CEO and Publisher. “Larry Watts is the icing on the cake, because his comic and horror sensibilities are just right to bring Cullen’s script to life. We’re taking Ash to the stars on his biggest adventure yet, and you’ll never believe what happens next.”

Army of Darkness #1 will be solicited in Diamond Comic Distributors’ October Previews catalog, the premiere source of merchandise for the comic book specialty market, and slated for release in December. Comic book fans are encouraged to reserve copies of Army of Darkness #1 with their local comic book retailers. Army of Darkness will also be available for individual customer purchase through digital platforms courtesy of Comixology, iVerse, and Dark Horse Digital. 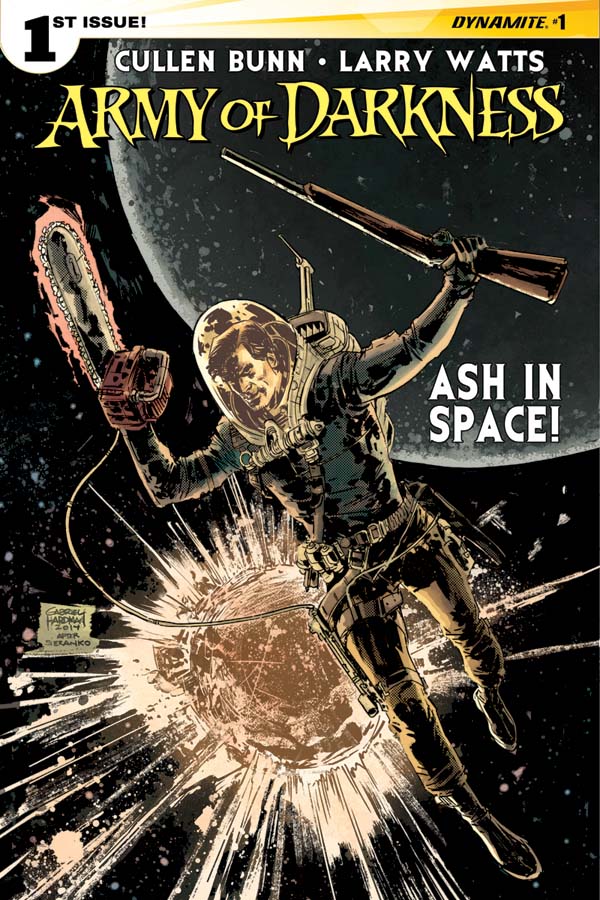 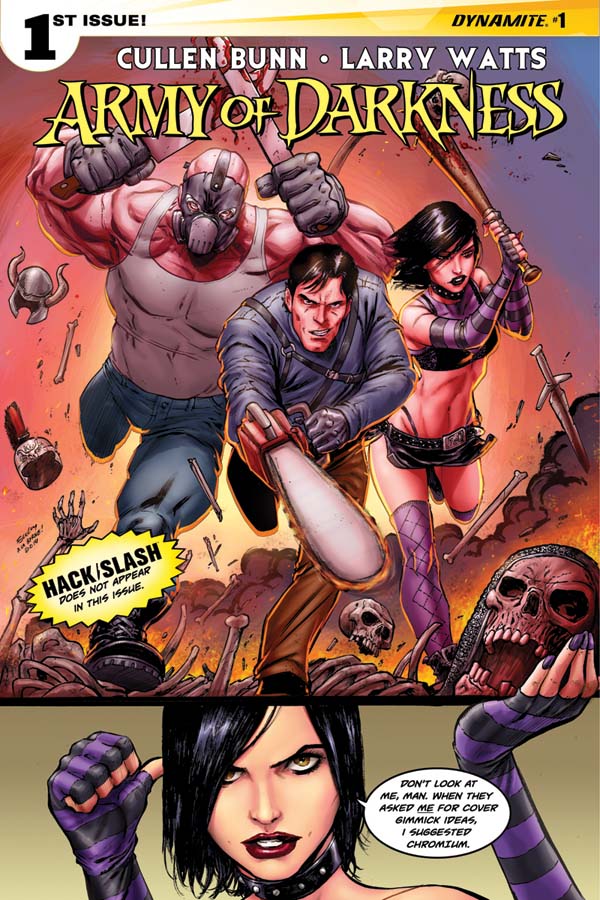 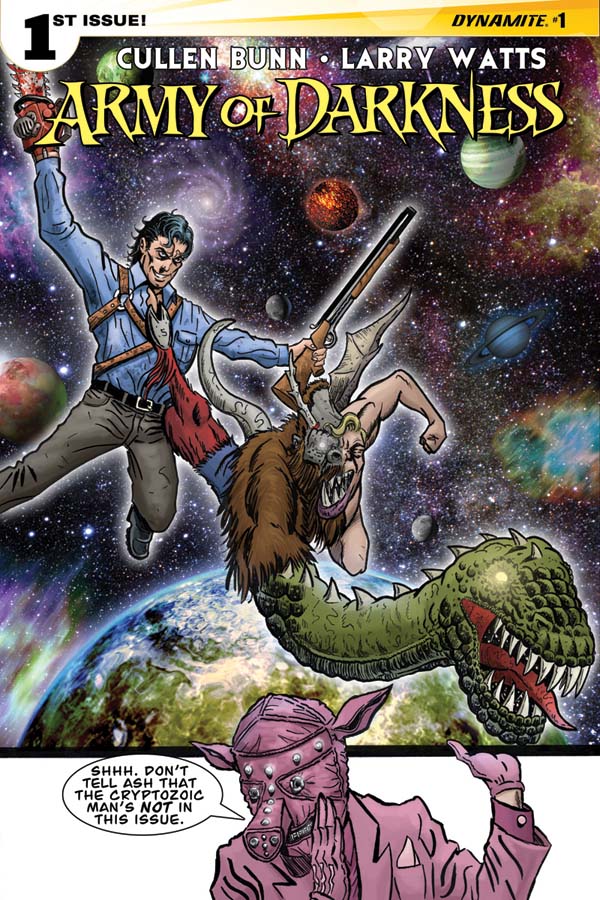 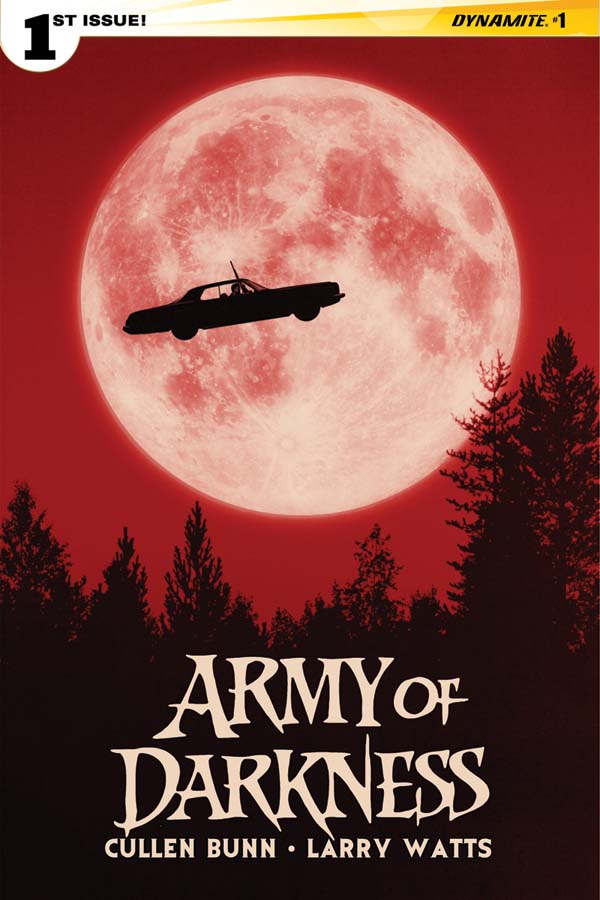