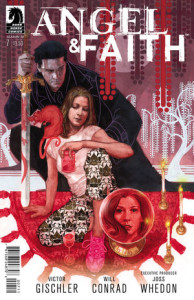 Angel & Faith: Season Ten # 7 (Dark Horse – Gischler / Conrad / Madsen) Amy the Rat has been seeking favors in Magic Town, and Angel is on alert—what is this witch really after? Meanwhile, Faith has tracked Riley into the jungle to find a tribe of vicious new vampires! Casualties be happening . . .

As a fan of the Buffy series, and most things of the “Whedonverse”, this was a pretty easy sell. It’s not Dark Horse’s fault that I haven’t been onboard the series from the start, so I’m taking this issue based on its individual merits. Forgive me if I get all sappy and stuff.

I have followed the Buffy comics that picked up after the TV series ended, and I’m happy to say that the high standards set in the art department are still in place. The characters are still easily recognizable to anyone who’s familiar, and the action should be entertaining to anyone who’s not.

The writing might be lacking some of the “Whedonistic” wit, but the characters of Faith and Angel, and the tone surrounding them, were generally more serious anyway.

Angel is in London, where witch Amy is trying to convince him to help her in resurrecting her boyfriend Warren (sorry, but if you’re not a fan of the shows or the comics already, you might just skip ahead a bit). Angel remembers the hate and discontent that Warren was responsible for before his death, and the spell to bring him back is no cake walk, so he’s reluctant to jump in.

Faith is in South America, leading a rescue operation that’s being run in a military/private contractor kind of co-op. Her troupe is made up of other Slayers, and she’s taken on a leadership role because… well, because she’s Faith. The rescue op is to find Riley Finn, ex-boyfriend of Buffy, and elite military commando. As they search an abandoned camp, Finn’s last known whereabouts, they’re overrun by a mass of indigenous South American tribesmen-turned-vampires… and they’re saved by Riley Finn’s wife Sam. Faith is a little discombobulated by Sam’s presence, because during her time among Buffy and her gang, there was a body swap where she wound up in Buffy’s body… and “doing the deed” her Riley. Sam’s husband.

Did you hear that? That’s the sound of a plot thickening.

Overall, I’m going to say that I’m in favor of any legitimate and honest attempt to keep the characters in this universe (All hail the Whedon) going. It looks like, at this stage of the series, everyone’s filling their roles and doing their thing in keeping with their backgrounds and personalities. A fan of the show could do a lot worse than hopping in here and seeing what Dark Horse has done for a dedicated fandom.