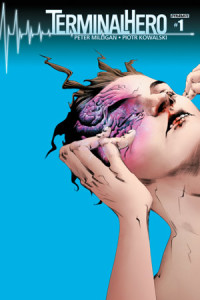 With Shade: The Changing Man, X-Statix, Doop and of course Hellblazer under his belt, Peter Milligan is now taking on Terminal Hero! Rory Fletcher is a good man. The problem is, he’s dying of an inoperable brain tumor. And then his best friend introduces him to the mysterious Treatment Q. This strange and forbidden therapy might just save Rory’s life. But its nightmarish side effects could make him question just how good he really is, and just how much he really does want to live.

Just like the blurb says, Terminal Hero is a new series from famed author Peter Milligan about a man by the name of Rory, a British medical student who’s into reggae and has an inoperable brain tumor. Things look bleak for Rory when he’s told he only has a few months to live, but hope comes when his fellow medical student friend, Raza, presents him with a special “top secret” treatment that could save his life, but comes with some dangerous side effects.

What’s standout about Terminal Hero is it’s take it on a character that has a rather cliche background. From Deadpool to Venom, comic book characters have been getting cancer and finding new ways to cheat death for some time now, but what sets Milligan’s Rory apart from those characters is how unsure he is about where he wants to take his new powers. He’s scared and has no idea if he’s as good a man he thought he was. Rory sees these new powers bringing out a darker, more rage-filled version of himself.

The issue features some eye-catching artwork. While the majority of the visuals of the issue are not bad by any means, once Rory is in his “power” mode the art is taken to a higher level compared to the rest of other panels.

The Bottom Line: All and all, a concept with a lot of potential. A good solid origin story!

Available at your local comic shop next Wednesday!

Pullbox Note: Zach is the newest writer for the Pullbox.  He a local thesbian in the SE Wisconsin / greater Chicagoland area and recently wrote, directed and starred in his one man show.