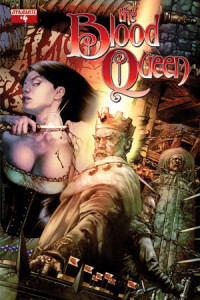 “Reign in Blood” continues as Elizabeth and Helena get a closer look at the power behind the throne. And as the king rides out to prevent a war, the battle may already be on its way to him! Plots and ambitions put everyone in danger, forcing Jon Hunter to reveal the lengths that he’ll go to for the crown. But what’s more frightening? A good person that goes too far, or someone that has no limits? The tension builds as Dynamite’s newest dark fantasy epic continues! From writer Troy Brownfield, artist Fritz Casas, colorist Kirsty Swan and letterer Marshall Dillon.

You don’t see very many epic fantasy stories told in comic books, especially stories that dip into court intrigue and crossing plotlines. This one looks to be taking advantage of the current favor of George R. R. Martin, and is giving its all.

The artwork is very good… In drawing a fantasy setting, many styles of comic book art wouldn’t work. Fritz Casas does a fine job here, using a more realistic and detailed approach, instead of going all MMORPG (if you’ve played any of them, you should have an idea of what I mean). The drawing goes a ways towards highlighting the writing, and that’s always helpful.

The writing is just what you think a fantasy epic needs… There isn’t a lot of over the top “thee’s” and “thou’s”, but the dialogue manages to stay in the time frame so the reader shouldn’t have trouble staying with the genre. Troy Brownfield does a good job of laying out the characters and separating them so it isn’t too tough to keep up with the cast (fantasy epic, remember? LOTS of supporting players wandering in and out).

As far as the plot goes, we’re following the rise of the Countess Elizabeth Bathory, the titled “Bloody Queen”. In issue 4, she seems to be new to the court of the king, a guest and friend of the queen. There looks to be a little bit of the rebel about her, not happy to sit and do needlework like the good little women of the time period. There are hints that she’s playing with the forces of magic, which should lead us in to her rise to power and fall into Evil.

If you’re a fan of the genre, there should definitely be enough here to pique your interest. The magic in play isn’t overbearing, or taking up too much time and space on the page. The action is fair, but it should be the plots within plots that will find an audience, and hopefully build a fanbase.