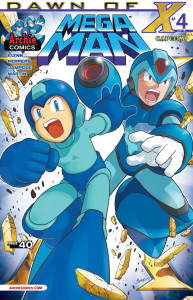 The PULSE-POUNDING CONCLUSION to the latest crossover MEGA-event from Archie Comics is here! “DAWN OF X” Part Four: The time-traveling adventure reaches its explosive finale as the mystery of Mega Man’s confrontation with the rogue Wily robot is revealed! X and the Maverick Hunters have their final showdown with the mechanical monsters!  And Xander Payne’s fate comes to a startling conclusion!  Don’t miss this crossover between iconic eras, with a SHOCKER-ENDING that will blow your mind! Featuring all-new cover art from Mega-artist supreme PATRICK “SPAZ” SPAZIANTE and a time-spanning variant cover by Colin Lawler!

Okay, I’m going to date myself and confess to having some great memories of playing the original Mega Man video game on the Nintendo (no, not the Nintendo 64… I’m even older than that), so I thought I’d give this title a read.

The book wraps up an arc in which the hero, Mega Man, takes on a giant metal monster.  Meanwhile in the future, “X” (from what I’ve figured he’s a future version of Mega Man… like 2.0) is battling the same monstrosity after it escapes from the tomb Mega Man had originally trapped it in.  There are some whacky hijinks, some fighting robot action sequences, and the forces of good triumph of mechanized evil.

The artwork goes back to the classic manga style that I enjoyed while watching “Prince Planet” (go ahead, YouTube that one, I dare you) and Astro Boy.  The writing is something that someone in or around their early teens would totally get into, a little “juvenile” at times (says the 40-something guy reading comic books) but still clever enough to keep an adult reading along.

“Wherever he went, they gift wrapped him for us.”

So it’s not going to be for everybody, but I’ll say that in my opinion it’s got enough to for to entertain anybody.  Hey, read it with your kids… Y’know, so long as your kid isn’t a college student rolling her eyes at you for reading comic books.