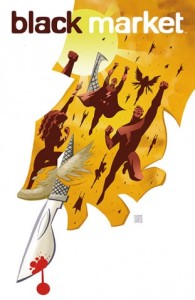 Under Denny’s coercion, Ray has successfully procured and sold his first batch of Super DNA on the black market. The scary part? He’s a natural, so much so that he and Denny need to expand their operation by bringing in some added muscle-a former hero with an axe to grind against the Supers who forced him out of the life.

This was my first time with the series, so I went into it knowing nothing about what’s going on, and within the first five pages I’m wanting to know more.  The series looks like it’s written in a world where there’s some suspicion regarding “supers”, a sentiment that has been mirrored in many books, old and new.  From what I’ve read here, in this series we see the conflict/dilemma from the side of the non-super community.

We open on an autopsy table where there’s a man laid out on the slab with a large hole in his chest.  As the main character, Ray, presides over the examination of the body, he points out that the corpse was bank robber killed by a superhero as he fled the scene of his crime.  Ray’s assistant goes into full on rant mode, wanting to know how normal people can hope to stand up to people powerful enough to punch a hole through a man’s chest.

Ray goes into internal dialogue mode, and takes us through a flashback to “happier times”.  He seems happily married, and is getting ready to settle in for a night of Indian food when there’s a knock at the door.  Ray opens door to reveal Denny, Ray’s brother, injured and asking for help… for him and for a friend.  Ray protests being brought into Denny’s “business.

Of course, he does get brought into Denny’s business, seemingly not for the first time, and since it’s an ongoing series, presumably not for the last.  The writing is good, and the story hook definitely has me wanting to see more.  The artwork isn’t the crisp and clean style of most “super” books, but it works with the story and writing.

Based on what I’ve seen, I’m giving the book a solid B.