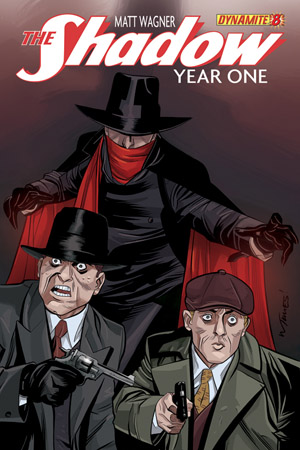 “In the aftermath of his sky-scraping battle with Big Gun Massaretti, Lamont Cranston hunts for the psychic super-villain who was puppet master to the belligerent mobster, the grotesque and mysterious Dr. Zorn. His pursuit takes him to all corners of the Big Apple, even as the NYPD are just beginning to hear reports of the dark-clad vigilante known only as The Shadow! Eisner Award winner Matt Wagner and artists Wildfredo Torres and Brennan Wagner bring the classic pulp hero’s fledgling adventures to life in this blazing hot ten-issue series.”

For me, The Shadow was one of the first “super heroes” I could be considered a true fan of. Sure, I was raised in the heyday of the Super Friends, Spider-Man and his Amazing Friends, and the long loved stream of 80’s cartoons used to sell toys (MOTU, Transformers, G.I.Joe), but the one that stood apart from the others was The Shadow.  Not because I felt it was any better, but it was vastly different for me. I would listen to the old records, 8-tracks, and cassettes of the Shadow at my grandparents house. As soon as I was able, I would read the original pulp novels from the local library and revel in the noir awesomeness. And, contrary to the opinion of most, I love Alec Baldwin’s The Shadow movie of the early 90’s.

Fast forward to today and the Shadow has been back in books and comics for a few years now. The latest rights holder being Dynamite Entertainment, and they have decided to give The Shadow the “Year One” treatment. I was a bit nervous jumping in on issue #8, but it didn’t take long for me to get lost in the pages.

Writer Matt Wagner and artist Wilfredo Torres are striking the right noir tone both in dialog and art.  Wagner is able to show the different sides of the Shadow. Even bringing in that the Shadow has many identities (I counted three in this issue) used to fight crime. Wagner’s dialog is just what I want from a pulp era book. I don’t think people always talked like they do in the movies, but it’s want I want out of a Shadow comic and Matt Wagner delivers.

Artist Wilfredo Torres brings us the visuals of early 20th Century New York City. The clothes, the buildings, the demeanor of the people just feels like it should. It feels like it could easily be Gatsby’s NYC, as well as the Shadow’s.

Final thought: Shadow creator Walter B. Gibson would be damn proud of how Dynamite, Matt Wagner, and Wilfredo Torres are treating his creation.