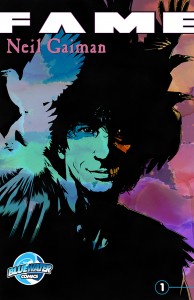 Neil Gaiman started out humbly in the so-called British Invasion of comics in the 1980s, writing rock and roll biographies, but soon leaped into the vanguard with his revolutionary series The Sandman, which helped launch the Vertigo imprint at DC.  His newfound literary acclaim helped launch Gaiman into the world of books, which he soon conquered with equal acclaim and passionate following from readers.  Gaiman is also one of the few comic book writers of his generation to make a successful transition into film.  Despite all this, he wasn’t immune to the growing controversies of the ’90s comic book scene, embroiled for years over the legal minutiae of creator rights.  Gaiman has managed to transcend all boundaries, however, a true icon for our times.

In June of 1969, a gay bar in Greenwich Village, New York called The Stonewall was raided by police.  This is historically agreed as the catalyst to set forth the gay rights movement.  Facing persecution, prosecution and a violation of their civil rights, the homosexual community was mad as hell and they weren’t going to take it any more.  The events at Stonewall lead to riots and demonstrations to open the dialogue and fight for the basic human rights of the homosexual community.  Bluewater Productions is proud to present Stonewall, a detailed account of movement that started with Stonewall and continues to this day with the gay community celebrating gay pride each year to commemorate the brave efforts of the community. Writer Michael Troy and artist David T. Cabera tell the important footnote in gay American History.

Actor, Teacher, Philosopher, Icon. These are just a few of the words that describe the most influential martial artist of all time: Bruce Lee. Immortal Dragon: Bruce Lee follows Bruce’s life from his infancy starting out as a child actor to his tragic death and posthumous superstardom.

From defending the U.S. Navy from the Barbary Pirates, the United States Marines are first on the scene and the last to leave.  In AMERICAN DEFENDERS: THE UNITED STATES MARINES, we find out how the few, the proud and the brave not only fight for freedom, but continue to defend America in their greatest times in need whether it be in the Halls of Montezuma or on the shores of Tripoli, you will be amazed their courage, tenacity and bravery.

Turns out blowing the whistle aginst your former employer — the US government — may not be the healthiest move after all for the disgraced ex-superhero known as The Liberator. Bluewater Comics’ LOU FERRIGNO: LIBERATOR #2 concludes the thrilling story of the once idolized icon of America — the manufactured superhero called the Liberator — who risks everything to finally really fight for truth and justice. Featuring Lou Ferrigno (The Incredible Hulk,) Michael Dorn (Worf from Star Trek,) Peta Wilson (La Femme Nikita) and Ed Asner (Up.)

Special edition with never before seen cover and the actual raw characer designs from one of Bluewater’s most popular characters,  Once Olympia’s greatest hunter, Orion sits as the centuries turn to millennia. Torn between his resentment of the Pantheon, his crumbling faith and his need to serve them, Orion seeks the ultimate purpose of his immortal life and is thrust in the middle of a conspiracy that can destroy Olympus. Orion delves into the dark underbelly of Greek mythos — the rumblings of a massive war between the Olympians and the lesser gods sits on the shoulders of a long ignored demi-god whom both sides see as the key.

Volume 8 of the graphic novel series Vincent Price Presents features classic gothic horror! One of classic Hollywood’s most famous scary men, Vincent Price made a name for himself in classic mysteries and thrillers throughout the 1940s, 50s and 60s. Now Vincent Price Presents comes to Bluewater Productions as their 1st ongoing monthly series. The series will feature some of Price’s films as well as developing new frightening ones with his estate. Welcome back to the macabre world of Vincent Price. Stories include Tell All Tales, The Return of Doctor Phibes and more!