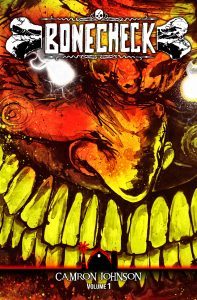 Hellbent on settling his ancestral bar tab with the local saloon, a shadow-infested stranger embarks on an evening of brutality. A nearby motel has been targeted as the location of multiple disappearances. Armed with savage instruments of pain, luxurious cigars, and a flask full of damn near poisonous hard liquor, the cryptic bounty hunter investigates and eradicates with a smile ever so sinister.
———-

With gratuitous and gut-wrenching glee, this purveyor of the price based in blood will advance his cause with caustic carelessness. His only purpose to provide his patron with service neither salubrious nor sane, this nameless numbskull will wreak wanton damage to property and person. If you see this noxious ne’er-do-well coming your way, it is with due-diligence that I advise you to step lively, for should your name appear on his board of bounties, the harried hunter will surely spell your demise with a demonic grin, bodacious bloodshed, and an unhealthy dose of alliteration.

I don’t do this very often, but for this review I’m damn well gonna… If you have the tiniest bit of good taste, moral sensitivity, or are in any way susceptible to bouts of socially acceptable acts of kindness, stay the hell away from this book and clear this review from your browser history. You don’t need this kind of damning evidence tied to you in any way, shape or form. On the other hand, if your reading tastes lean more toward the chaotic, the visceral, or the surreal, continue on down the rabbit hole to hell that is Bonecheck.

I first met creator/writer/artist Camron Johnson at a Milwaukee Mighty Con a few years back. In fact, this would have been in my early days writing for thePullbox, and his comic- Thy Neighbor (check the review here)- would have been one of the first that I’d gotten directly from an independent creator for review. Then just last week, I was surprised by an email from Johnson, getting back in touch with the hope that we could take a look at the first volume in his new title, published under the Broken Icon brand.

Bonecheck is all about creative mayhem, in the best- and worst- sense of the words. At times, the story flows as though Johnson were exercising some kind of stream of consciousness drill, letting words spill haphazardly across the page, to be arranged into some semblance of form after the fact. I’m gonna have to confess that it took me a few pages to catch onto the rhythm of Johnson’s writing, as it relies heavily on the absence of expectations. Nothing in this book fits neatly into what discerning comicbook readers might consider “normal”. If I were to compare it to anything, it would have to be some of the underground ashcan comics that would get passed around at the punk rock or thrash metal concerts of my youth.

This is a definite niche title, looking for an audience with an appreciation for non-traditional storytelling. If I can dip back into my musical reference, both the writing and the artwork have the look and feel of something you’d see gracing the sleeve of an old Suicidal Tendencies album, or maybe some early Iron Maiden. When it comes down to it, Camron Johnson is a creator whose “filter” has not only been turned off, but has also been soaked down in bourbon and set on fire. If you’re taking any of this review to mean that Bonecheck isn’t a quality work, I’m gonna have to ask you to step back and reconsider. This isn’t a book for the meek or mild, looking instead for readers who are more open to its uniqueness and are able to process it for what it is.

Might wanna keep a number for a crisis help hotline handy, though… just in case. You could trip over a pile of moral ambiguity and sprain your morality while attempting to read it.