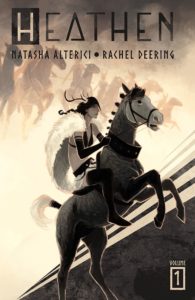 Once again Aydis finds herself alone. Now she must journey to the elusive place known as Heimdall, the living gateway to the land of the gods. To get there, she must brave the treacherous waters of the Northern Sea. But hiring a ship proves trickier than she imagined.
———-

Aydis, a Viking warrior of determination and ingenuity, is on a quest. She was sentenced to death merely for her preference in the company she kept- she kissed a girl- and set loose by a father who loved her but couldn’t protect her. She’s taken on the task of freeing the imprisoned Valkyrie Brynhild, to challenge the narrow views of gods and the people of her world. She’s made friends along the way- shape changing trickster Ruadan; love goddess Freyja; even Brynhild herself, now freed from her captivity but still in danger of retribution from All-Father Odin. Driven by her refusal to accept the status quo, Aydis has become an agent of change as she journeys across the chaotic landscape of Norse legend.

Technically, I’d have to say that this is a review of more than just issue five of Heathen, and I blame Twitter. That’s right, you heard me, Twitter, this is all your fault. It started with an uproar over the news that Heathen’s sixth issue wasn’t being picked up for solicitation. I kid you not, a veritable riot of posts from people who were upset about Aydis’s quest ending prematurely. Thankfully, the folks at Vault Comics spoke up to reassure everyone that Heathen would continue, just not in time for issue six’s originally scheduled release date. Seems that in some cases, creative talent comes at a cost, and Natasha Alterici needed some extra time to get through some health problems. The folks at Vault comics got her back, and there will be more Heathen on the way…

So with all of that brouhaha, I found myself wondering what kind of comic could create that kind of dedication after only a handful of issues, and I took on a quest of my own. I didn’t climb any mountains or brave the wrath of a god. I just read the first issue. It was pretty damn good, so I read the second issue. From there it was pretty much a foregone conclusion so I just picked up the other three and settled in for a bit of a binge. Now I’m just happy that I’ve already seen the announcement from Vault, because if I thought that Heathen was going to die on the vine after issue five, I was gonna be one of those irate readers clamoring for justice.

Heathen takes on many themes, central among them one of acceptance in the face of change. The setting is right around the time Christianity was making its way through the lands, and causing a bit of a stir for many. See, the Viking gods were still kicking around, doing their thing and not really looking to knuckle under to an upstart religion. What’s more, there were plenty of folk living out their lives who were falling victim to the new beliefs and restrictions (how’s an honest witch, an innocent brewer of potions, supposed to make a living when suddenly pious villagers start calling for a stake burning?).

Not to say that the Vikings themselves were all “live and let live” themselves. Remember what started this whole thing? Aydis kissed a girl, and because she wouldn’t accept betrothal to a man, her father was supposed to drag her out into the woods and kill her. Luckily for Aydis (and we readers who’ve become involved in her story) her dad loved her and couldn’t carry out the sentence, instead letting her go free to find her way in an unsuspecting world.

Sure, Aydis could’ve taken an easier path and just disappeared into the forest, keeping a low profile and living out her days, but that would’ve made a pretty boring comic. Thank the gods, old and new, Natasha Alterici had the same idea, because she’s written something that’s anything but tedious. She’s taken bits of Norse mythology, with a healthy dose of Wagner (there’s no way you haven’t heard Brynhild’s theme song) and come up with a title that’s pretty special. And because she’s just that kind of badass, Alterici has doubled down on the workload and is filling the roles of both writer and illustrator.

As a writer, Natasha Alterici has laid down some pretty impressive work. She’s crafted characters that live up to the hype surrounding Nordic myth, people who have very real thoughts and problems, and the courage to face them head on. Now, lest Heathen be pegged as being aimed at any one demographic, rest assured that Alterici has covered all bases, managing to represent all manner of folk in her book. Case in point- while Aydis is determined to save Brynhild from Odin’s curse by defying convention and marrying her, Bryn is herself still in love with Sigurd, the Viking man who had fallen in love with her three centuries before (that’s a whole other story, intertwined and running parallel to Aydis’s within Heathen’s narrative).

All of the clever writing in the world isn’t going to result in a quality comicbook without the art to go with it. No worries there, because as an artist Natasha Alterici has done an outstanding job. Her style is kept pretty light, so fans of the History Channel’s TV show “Vikings” might not really recognize the setting, with its lack of dirt, grime, and gore. Still, it works out great with the tone of the story and its themes. While there may not be many big action sequences, what there are have been done very well, with an almost cinematic quality. One in particular was pretty slick, featuring a charge of the Valkyrie (Brynhild… and yes, Wagner’s score was playing in my head) on horseback. At the last second, Alterici’s “camera” pulls back for a wide shot, capturing Bryn in action as she vaults from the saddle and over the heads of an angry mob for a dramatic confrontation.

Don’t be a twit and write Heathen off as a title aimed exclusively at women. It’s a testament that Natasha Alterici was able to weave a story that can be embraced and enjoyed by anyone… I myself am a relatively conservative male, who enjoys kung fu movies and comics like Alien Bounty Hunter (yeah, okay, pandering a little to Vault here), and I’m a fan. In fact, I’m kinda hoping that she’ll be able to attend C2E2 this year, cuz I wouldn’t mind getting the Heathen trade paperback signed.

Natasha Alterici, keep up the very good work! We wish you a speedy recovery, although I’m gonna have to cop to having my own selfish motivations. You got me hooked, and now I need a fix.

And now, because this has been more of a review on the series overall, here’s a sampling from issues 1-5… 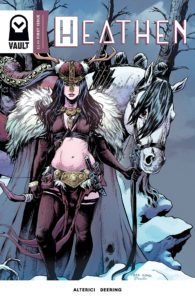 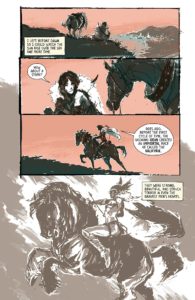 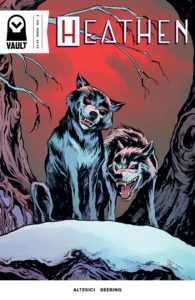 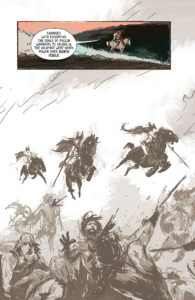 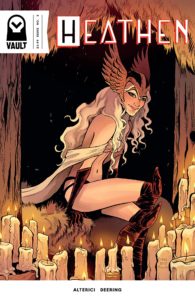 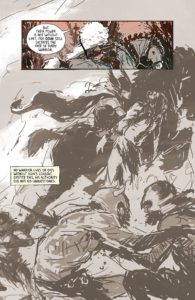 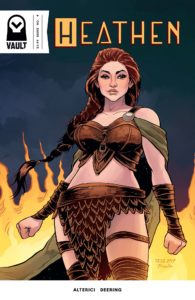 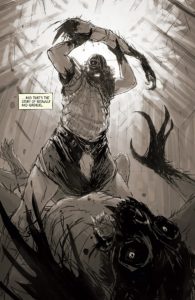 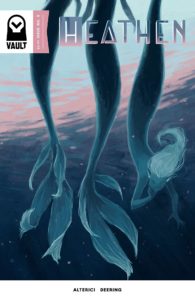 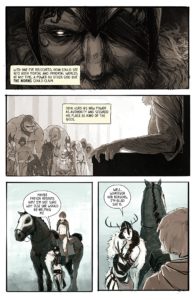