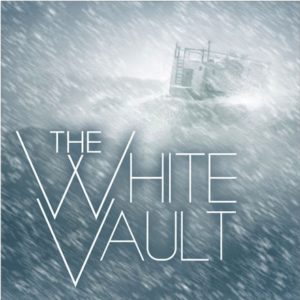 The White Vault Opens To Rave Reviews
Fool and Scholar Productions First Season is a Wild Success. At only halfway through the first season, Fool and Scholar Productions latest release The White Vault is proving to be a runaway success. 5 episodes in and the Lovecraftian indie horror fiction audio drama podcast has already been featured in the top 10 charts for The Arts and Performing Arts on iTunes/Apple Podcasts around the globe and made it to the top 100 Chart on ‘All of iTunes’ for the US. The story follows the collected records of a repair team sent to Outpost Fristed in the vast white wastes of the Arctic Circle. A new episode is released every two weeks and is intended for mature audiences. Check it out at http://whitevault.libsyn.com/ as well as iTunes, Spotify, and Podchaser. Podcast listeners can enjoy no advertisements, announcements or interruptions in story flow until episode 10 which is the finale of the series.
Fool and Scholar Productions is a team effort. Kaitlin Statz (Liberty: Critical Research, Creepy), is the writer, director and creator-writer/creator of the series. Travis Vengroff (Liberty: Tales from the Tower Critical Research) produces. Accuracy in sound and linguistics is something this duo strives for. The White Vault features a truly international cast with segments spoken in half a dozen languages including Germany, Russian, Icelandic, Spanish, and more and in almost every episode as the native tongues of our cast. Notable cast include: Jónas Þórirsson is voiced by Eyþór Viðarsson, Dr. Karina Schumacher-Weiß is voiced by Kessi Riliniki(The White Vault), the Documentarian is voiced by Hem Cleveland (The Lucky Die), Lani Minella as the voice of Dr. Rosa De La Torre (Nancy Drew, The Last of Us), as well as David Ault, Peter Lewis, and the show’s composer Brandon Boone who are all from the hit podcast NoSleep.
If you are a fan of The Thing, Trapped, or Fortitude you will love The White Vault. Check out the trailer for the series here: http://whitevault.libsyn.com/white-vault-horror-audio-drama-trailer
Social Media Links:
https://twitter.com/WhiteVault
https://www.facebook.com/WhiteVaultPodcast/
https://www.patreon.com/LibertyPodcast – The show is 100% fan supported. Without the support of fans there is no show. The team is preparing to release a Patreon-only story as well, which ties into the White Vault story
Please follow and like us: