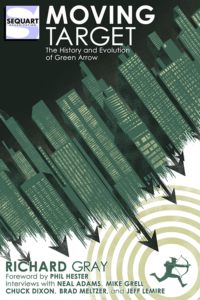 For 75 years, Green Arrow has been a part of the DC Comics world, working his way up from a supporting player to the star of a flagship television series. Yet for much of his career, he was a hero without a home, separate from his contemporaries, or unfavorably compared with a certain Dark Knight.

Whether it is the “cowboys and Indians” influences of the 1940s and 1950s, the rebellious realism of the 1970s, the darker edge of the 1980s, or the melodrama of his TV personas, Green Arrow has remained the conscience of the comics world, and perhaps an even better representative than Batman of what one person can do.

This collection is the definitive analysis of the Emerald Archer, from his Golden Age origins to his small screen adventures and beyond. Exploring overlooked chapters of Green Arrow’s life, and those of alter ego Oliver Queen, this book shows that Green Arrow has never been just one thing, but rather a perpetually moving target. Includes new interviews with Green Arrow creators from across the decades, including Neal Adams, Mike Grell, Chuck Dixon, Phil Hester, Brad Meltzer, and Jeff Lemire.
———- 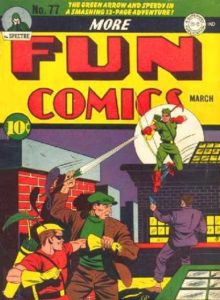 Since his first appearance in the pages of More Fun Comics #73 in November of 1941, Oliver Queen has filled many roles. Originally intended as a near-clone of the successful Batman character, the Green Arrow has drawn elements and comparisons from the likes of Robin Hood and William Tell, as well as the Caped Crusader. While he may have started out life as a composite (see what I did there?) of those well-used archetypes, Green Arrow’s longevity attests to one very simple fact: he is greater than the sum of his parts. Take a look at where the DC Universe would be without its Emerald Archer, whether he was working a supporting role in someone else’s title, headlining one of his own, or featuring in his very own successful television show, the secret to Ollie’s success has always been in his adaptability. He was DC’s “blank slate”, able to fill whatever part DC needed, to be inserted when the need for a very specific trick arrow arose and then promptly removed from play at any given time. From that fringe status, he’s become one of the more recognizable and loved characters in comic book history.

I’ve been a fan of the Green Arrow for just about as long as I’ve been reading comics. While I wasn’t around for the introduction of a few of Arrow’s more recognizable gimmicks, like the bolo arrow in 1940, or the even more infamous boxing glove arrow which Ollie used to take down the Storm King in the pages of Adventure Comics #118 in 1947, I was around for much of the defining run of Dennis O’Neil and Neal Adams. The Green Arrow I know is the one first drawn by Adams in 1969 (although it was probably closer to the mid 70’s before I picked up my first issue), with the “van dyke beard”, and Errol Flynn hat. The voice I hear him speaking with is the one given to him by O’Neil, who took the blank slate and molded him into the socially outspoken liberal warrior who would stand up to the entire Justice League if he felt they were forgetting about the “little guy” in their world saving endeavors. I was on board for Mike Grell’s “Longbow Hunters” in 1987, which put the character through another evolution, building onto the foundation set by O’Neil and Adams, and giving us many of the elements we see today. Know that when you’re watching Arrow on TV, it’s Grell’s hooded “urban hunter” that you’re watching leap across the screen.

Long as my history with Green Arrow may be, I knew that there were gaps, so it was that when I found out that there was an in-depth study done, and a book published, I was more than happy to dive into it. That I was also going to be given the chance to put together a review of said book was a step beyond my usual fare for thePullbox, but my wife has assured me that the ability to run off at the mouth isn’t something I’m lacking, and so here we are. The book has been read, notes compiled, and I’m proud to say that for a reader of comics who can trace his pedigree back into the mid-70’s, it was an education.

Author Richard Gray has compiled a painstakingly comprehensive look into the life and times of one Oliver Queen, aka: The Green Arrow. If there are still scraps of information out there waiting to be found, I can’t imagine what they might be. What’s more, he’s taken that information and distilled it into its component parts, organizing the character’s often fluid and convoluted continuity into a very readable book. Starting with Arrow’s humble origins, such as they were at the time, Gray details the work of writer Mort Weisinger and artist George Papp as they created the “wizard archers of the century”, Green Arrow and sidekick Speedy. We follow Arrow and Speedy through their early years, and on into World War II,working to keep the home front safe while our soldiers fought overseas, and all the while making mention of the benefits of buying war bonds at every opportunity. I learned that the Justice League wasn’t Arrow’s first team effort, but that during the war he and Speedy were part of the “Seven Soldiers of Victory”.

Certainly not shy when it comes to talking about the bad, Gray dips into some things Ollie himself might not have been too proud of. In his original backstory, millionaire Oliver Queen had learned all there was to know about the Indian culture, through his interest in archeology, digging up ancient burial sites to discover their treasures. Meanwhile, prior to his meeting with the Emerald Archer, Speedy had learned his archery skills from “old Quoag, my father’s Indian servant.” The entire narrative is, according to Gray, “rife with the casual cultural racism of the time”, influenced as it was by the popularity of “Cowboys and Indians” stories in movies and books. While there may have been some attempt at paying homage to the culture and lore, it was a pretty slipshod version of it. When you think about it, it kinda makes sense that there aren’t many reprints of those old stories out there anymore. An unintentional slap in the face isn’t any less troubling, and the Golden Age of comics wasn’t known for its cohesive plotlines to begin with. 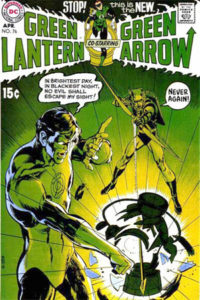 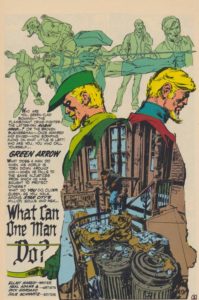 But things did get better… As DC Comics came into the late 60’s, things were about to change. Along came a young artist, fresh out of Manhattan’s School of Industrial Art, ready to make his mark on the world. Earning a good living in advertising, this motivated lunatic wanted nothing more than to make a living as a comic book artist. After a few denials, young Neal Adams finally landed his dream gig, and with his focus on artistic composition, anatomy, and breaking out of the uniform panel format, he redefined how comics were put together. Adams found himself assigned to the generally bland but always performing Green Arrow, along with writer Denny O’Neil. The medium was elevated and DC’s go-to “blank slate” was about to get a new voice to go along with a dynamic new look. Out were the dated duds of his first thirty years, and the world was introduced to the look that pretty well defines Green Arrow to this day.

Over the years, Oliver Queen has been passed from hand to creative hand, with every new team leaving their mark embedded his DNA. He’s experienced change and hardship, won and lost fortunes. O’Neil and Adams created the socially relevant and outspoken hothead we all know and love. Mike Grell took Arrow out of the DC Universe proper, isolating him in Seattle and turning him into an urban hunter, hunting predators (Dark Ollie). Chuck Dixon put him back on the road, the working man’s superhero trying to mete out justice and make his rent. Kevin Smith resurrected a Green Arrow who had been killed in action in the mid 90’s and dead for several years, but bringing him back as a soulless “Hollow” who had no memory of anything that had happened after the mid 70’s. Judd Winnick came around full circle and returned Ollie to his status as the liberal left’s outspoken mouthpiece, ready to fight for a cause at the drop of a pointy, feathered hat.

The single constant is that, whether he’s battling some cosmic menace alongside the Justice League, or scrounging for bus fare as an everyman adventurer, Ollie is always one of the mainstays in the DC Universe. Taking one really big step farther than that, the adventures of Oliver Queen and company can now be seen in live action high definition, leaping across television screens in homes worldwide. No longer a “second stringer”, and far beyond the possibility of being deemed a fad character, the Green Arrow was/is/always will be greater than the sum of his parts. Now, if only someone would put together a book, detailing everything from the character’s humble beginnings to the many creative hands involved in his evolution… 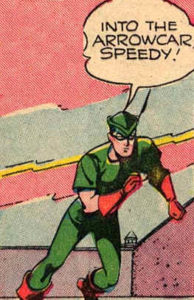 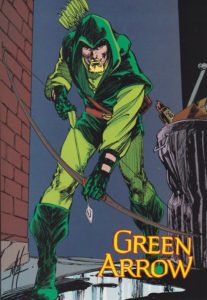