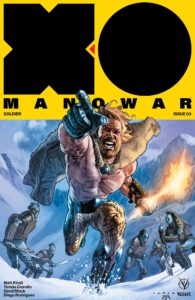 “Their world became his war!

Across every frontline, and through every trench, Aric of Dacia continues his hostile journey through a brutal alien planet the only way he knows how: with war. But the man once known as X-O Manowar is not alone. With a dedicated band of soldiers sworn to his side, Aric will prove his worth on the battlefield… and find himself in a position that no one saw coming!

Having accomplished yet another impossible mission, Aric’s team of ne’er-do-wells is surrounded by Cadmium warriors determined to fight to the death in order to prevent their escape. Their best chance for survival is to seek out the next impossible task, to kill the Cadmium President. Once the proverbial head has been cut from the proverbial snake, the Cadmium forces will lay down their arms in the face of the ongoing Azure attacks. Once again, Aric of Dacia finds himself reluctantly thrown into the role of the leader during a time of war. It’s a role with which he’s increasingly unhappy; however it’s also a role in which he undoubtedly excels.

The ongoing theme of Valiant’s newest story arc, starring their flagship character Aric, is probably one of the most interesting that he’s been a part of in a long while. We’re used to seeing Aric flying high with the practically unstoppable X-O armor. To be honest, I’d lost interest in this series a while back, pretty much because Aric was just so tough that he wasn’t as interesting to me anymore. Now, I’m gonna be fair here and put out there that my favorite comics have generally been the ones featuring more second string and less well-known heroes: Daredevil, The Question, and Iron Fist just to name a few from DC and Marvel. I could go on to mention some of my favorite characters coming from the independent publishers, but all you really need to do is look back at some of my past reviews.

Besides, we’re talking about X-O Manowar here, the sentient battle armor named Shanhara. More precisely, we’re talking about Aric. In this arc, now three issues in, Aric has started out a man of war determined to find peace, gone to a conscripted soldier forced to fight in order to survive, and now to a warrior who’s just damned good at his job whether he likes it or not. He’s so good at it that he’s attracted a squad of total misfits to his side, loyal to Aric and his ability to see them through the most dangerous missions and out the other side again. That right there, that idea of the loyalty among soldiers, is what’s really grabbed my attention in this series.

Okay, that and the outstanding cover art that’s graced the front of every issue so far… I still go back to that first issue and the total “A New Hope” vibe it had going on, and think that’s one of my favorite comic covers of all time.

Matt Kindt has done an outstanding job of showing a different Aric. Gone is the man who defined himself by the cosmic battles he’s waged, encased and empowered by the X-O armor. Now, he’s determined to do whatever it is he has to do to survive, and to ensure the survival of those he’s grown close to, without the help of Shanhara. At every step, he’s got Shanhara whispering sweet nothings into his ear, urging him to accept the help, the unbridled power that the armor can provide. And all the while, Aric wants nothing to do with it. If he has to fight, he’s going to do it as a man who had been fighting battles since long before he ever took up the armor. And let’s be honest… he’s really, really good at it!

Taking up the visual side of the artistic challenge, the team of Tomas Giorello, David Mack, Zu Orzu, & Diego Rodriquez has a lot on their collective plate. The action is intense, flowing from one panel into the next as Aric and company fight for their lives. As far as epic sci fi goes, they’ve nailed it in these books. The clearly defined characters leave us with little doubt as to who’s doing what at any given time, and there really is a sense of motion as the story moves from one action scene to the next. The most impressive aspect, as far as I’m concerned, comes in between those action beats, and later on in the issue after the battle is over. The close ups we’re given of Aric show a guy who really doesn’t want to be there, who would love nothing better than to be left alone, at peace, to come to terms with what he’s lost. He has no interest in the fight, but he can’t allow those around him to be slaughtered if he can do anything to prevent it. It’s right there in the eyes, man.

Maybe I’m overstating it a little bit, but that’s what I’ve taken away from the opening issues in this run. And I gotta tell ya, seeing as how the front cover shows the title of the book is still X-O Manowar, I’m looking forward to what sort of fiery chaos is going to convince Aric to give in… to once again take up the burden of wearing the mystic armor. I have no doubt that it’s going to be brutal, it’s going to be tragic, and that whoever is responsible for it is going to be in a lot of trouble. 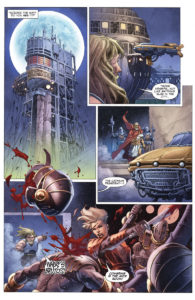 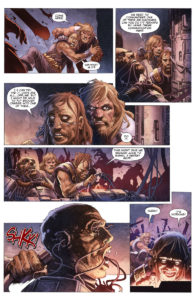 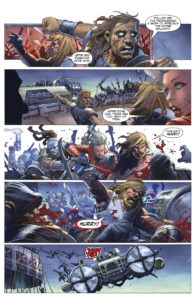 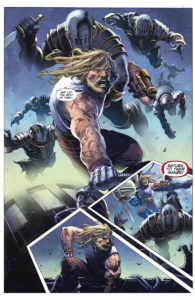 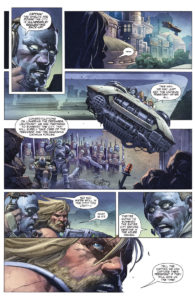 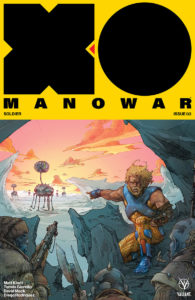 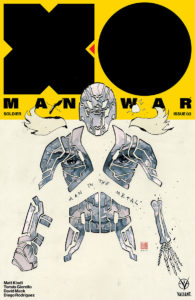 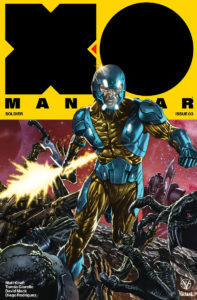