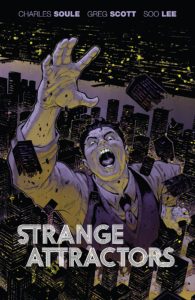 Review of issue 1 can be found here

Writer Charles Soule (Daredevil, Poe Dameron) and illustrator Greg Scott come together for a science-fiction tale of the ties that bind New York City. Dr. Spencer Brownfield, a disgraced former professor, believes a series of cataclysmic events are coming to New York City, and someone has to keep the city safe after he’s gone. Enter Heller Wilson, a brilliant mathematics student who discovers that his ailing—perhaps insane—mentor has been saving New York City from societal collapse by a series of “adjustments,” a la the butterfly effect. But now, all signs point toward an impending disaster. Can Wilson take what little he’s learned and save the city in time? Collects the complete series. Includes the never-before collected short story “Antithesis,” illustrated by Soo Lee (Liquid City).
———-

A young Teaching Assistant at Columbia University gives a heartfelt dissertation on the fragility of New York City’s infrastructure, and then promptly throws himself from a window. Heller Wilson, a Columbia grad student, approaches an elderly man he believes to be Doctor Spencer Brownfield, formerly a member of the mathematics faculty until a fall from grace. Heller is looking to speak to Dr. Brownfield about his ideas on Complexity Theory, some of which were deemed ridiculous and outlandish and led to Brownfield’s dismissal from Columbia. Dr Brownfield listens to Heller’s plea despite being a very busy man.

Busy may be an understatement. It can’t be easy to be the only person able to see the strings of cause and effect that keep a city like New York from collapsing in on itself, and to be the one to shoulder the responsibility of plucking those strings here and there to prevent said collapse.

Strange Attractors is an interesting book for a couple very different reasons. First is the use of ideas like complexity theory and the cascade effect to tell a story. Where Complexity Theory describes how a complex organism relies on its myriad internal systems to survive, no matter how inconsequential they may seem, the Cascade Effect shows how horribly wrong the whole thing can go when one of those systems experiences the tiniest of hiccups. It’s in those obscure schools of thought that this story takes place.

New York is by every definition a complex organism, kept alive by thousands of daily events unfolding without any real direction or control, and taken for granted by the populace as immutable circumstance. For an idea of how tenuous the whole system is, bear in mind that much of New York is an island. Now consider what could happen if some disastrous event were to take out the city’s supply lines. What if the electrical grid, a woefully outdated network of fraying power lines and overburdened computer systems, went out? Without a doubt, New York has seen more than its share of disasters, natural and man-made, and has thus far proven to be more resilient than should be possible, able to recover far more quickly than cities that have suffered comparable crises.

Most would attribute New York’s level of fortitude to its people, those tough as nails go-getters renowned the world over for the “New York state of mind”. Think of a New Yorker, and the image that often comes to mind is a pugnacious, determined, no-nonsense fast talker with an accent that’s immediately recognizable. Others would say that the New Yorkers themselves owe their grit to the spirit of the city that never sleeps, that seems to have her own ideas of who and what will be granted success and asylum inside her borders. Dr Spencer Brownfield would tell you that he is personally to thank for the city’s ability to shake off adversity, to recover from disaster, to overcome that which should by all rights have shaken New York down to the foundations and left it in ruin. You’re welcome.

Through his intimate understanding of Complexity Theory and how all of New York’s moving parts interact with and rely on each other, Dr Brownfield has mapped out a design that could be the blueprint for the city’s lasting success. Conversely, and in the hands of a less competent individual, Brownfield’s complexity maps could also herald the beginning of the end for one of the world’s greatest cultural hubs.

Now here comes the other interesting thing about Strange Attractors. All science and math aside, totally ignoring any potential disaster suggested in its pages, this book is by author Charles Soule’s own admission a love story dedicated to New York itself. Each page is graced with cultural references, glimpses of beloved landmarks, and loving memories of sites that have been lost over the years. Reading the author’s forward and then putting it into context with the rest of the book, I can almost believe that Soule truly believes that the city of New York is a living, breathing entity.

This loving regard is born up by the combined efforts of Greg Scott, Art Lyon, & Matthew Patz. Together, they’ve captured the chaos, the pulse, and the guts of New York City. The leading characters, Heller Wilson and Spencer Brownfield, are only really there as reference points for those of us who just don’t get it. Where a New Yorker might immediately recognize places and situations rendered to the pages of Strange Attractors, the rest of us have Heller’s narrative to help us along and explain things. It’s with a heavy thanks to the visual aspect of the book that the feat of making a main character almost an afterthought is possible. At times while reading, I wondered if we really needed a central and consistent protagonist. There were moments in the book where the story jumped away from Heller, to a completely random and unnamed individual, and I almost didn’t even notice. It’s those “a day in the life” kinds of visual cues that have me convinced that Soule isn’t the only person composing a loving homage’ to the Big Apple.

All references to New York’s music scene, its plethora of bodegas, mom & pop stores, and restaurants aside, Strange Attractors is a great piece of storytelling. Equal parts hopeful opus and dark premonition, the book will work for just about anybody willing to dive into it… I’m usually reviewing comics with time traveling ninja super spies, and it was plenty interesting for a mook like me.

If you have a passing interest in mathematical theories involving Chaos and Probability, if you’re curious about taking a glimpse inside the city from the perspective of a devoted New Yorker, or if you like books hinting at or bordering on preternatural happenstance as a plot device, pick up a copy of Strange Attractors. Just be careful of the next caterpillar you see… if you step on it, you could be bringing on the End of Days. 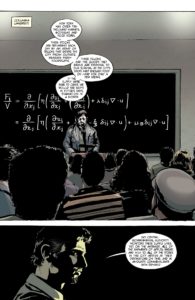 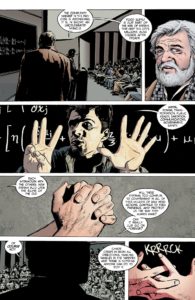 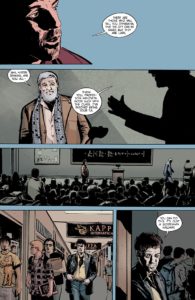 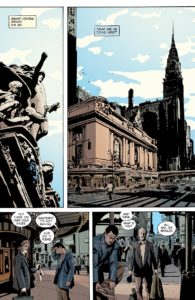 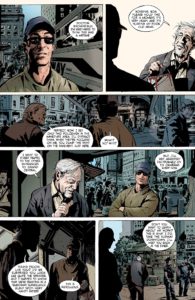 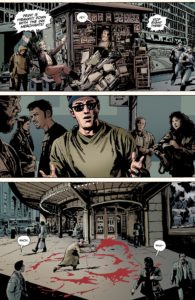