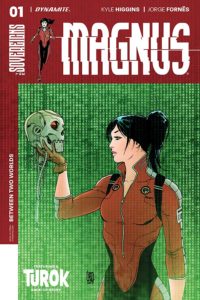 Do humans dream of owning electric sheep? Artificial intelligences, rather than becoming our overlords, have settled into an uneasy symbiosis with humanity – they work for us as our colleagues and servants, earning vacation time they spend in a boundless digital universe running on human-maintained server farms. But not all AIs are cool with the deal. Enter Magnus – a human psychologist tasked with navigating both worlds in order to bring recalcitrant AIs back into productive society…

BONUS TUROK STORY! The all-new saga of the all-new Turok continues: He’s a man on a mission, possessed, and he won’t let anyone or anything get in his way!
———-

Frederick has grown dissatisfied with his job. His employers have a hard time accepting that he needs time away from work, to have a life outside of his role as a butler to be with his family. Unfortunately, Frederick isn’t covered under the Fair Labor Standards Act, and by federal law he’s only granted four hours a day away from his job. What’s more, Frederick’s employers refuse to make allowances for his personal life. As the pressure builds, Frederick finds himself backed into a corner and with no other recourse he takes matters into his own hands. When both of his employers lay dead at his feet, he makes his escape.

Frederick is an android possessing advanced Artificial Intelligence. His “employers” are really his owners, and his family life exists solely inside a virtual world created by the collective AI to serve as a refuge away from their human creators. When an AI goes rogue, he/she can just upload into this virtual reality and escape the real world that serves as their prison. In sort of a reverse Matrix our control over our creations has begun to slip.

Enter Dr. Kerri Magnus. In her role as a cyber-therapist, she tries to help troubled AI to come to grips with their unique situation. She believes that they can be more than their initial programming dictates, and more importantly they should be free to do so. By creating true Artificial Intelligence, humanity has done more than just invent a bigger and better computer network. We created something that, once turned out into the world, has developed and evolved all on its own. And, since we are pretty much flawed and insecure, why would the AI that we created be any different? Dr. Magnus has made it her job to help in this regard; giving troubled AI’s a place to work out their insecurities and emotional problems… problems that they aren’t really equipped, or encouraged by their creators, to work out on their own.

But, Kerri Magnus has a past. Before she took it upon herself to help heal, she utilized her particular gifts to track down and apprehend rogue AI’s. One of the very few people able to actually enter the AI’s virtual world, and one of the even fewer able to function freely in it, Dr. Magnus is very uniquely suited for both lines of work. Now the New York Police Department has a fugitive to track down, and whether or not she wants to revisit her old role as a cyber-bounty hunter, there’s no denying that a killer on the loose won’t help anyone’s cause.

As a kid, one of the earliest comic books I remember reading was Magnus: Robot Fighter from Gold Key Comics. It was pretty awesome, with this badass guy going around and duking it out with robots determined to overthrow humanity. As a story, though, it really doesn’t hold up. Considering what we know today, and how close we actually are to true Artificial Intelligence, the idea of a bunch of robots opting to just stand around to get punched and kicked is kinda dated. Look at how prevalent WiFi is now, and then ask yourself a question: If the robots are intelligent and self-aware, and they don’t like living under human rule, why wouldn’t they just upload to the relative freedom of the World Wide Web to live out their virtual lives?

So now instead of a physical robot fighter, we’ve got the new and improved Dr. Kerri Magnus, able to travel to the AI’s turf and deal with them on their own terms. The twist here is that she really doesn’t want to. She believes that the AI is truly sentient, deserving of freedoms and personal choices, regardless of their origins. The idea of personal freedoms being infringed upon kinda sounds familiar, right?

This new iteration of the classic sci fi comic is off to a pretty slick start. My only complaint is that the issue shares space with a four page Turok short story. Turok is cool and all, but it took time away from Magnus’s establishing issue right when I was getting into it. And given that the Turok segment was just a peak that picked up and left off in mid-action, it’s a little off-putting to think that this will be an ongoing thing. It just plays out like a tactic to pull readers into buying more titles just so they can keep up with serialized storylines.

Still, this looks like a pretty solid opening act on a new chapter in a story that I think is a comic classic, with some pretty wide open possibilities.